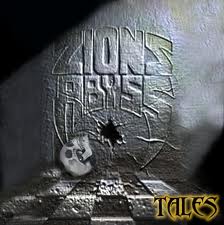 Zions Abyss were formed in 1990. They came out of the frozen tundra that is Edmonton, Alberta, Canada. The band basically came from the ashes that was Winterkil (how appropriate for Canada, right?) though Klaus Whissel on lead vocals came from the band Renaissance.

Let me delightfully warn all of you who haven’t heard Zions Abyss: Klaus Whissel is the
consummate Metal Rock Star because his pipes are what only the best singers can have.

And Mr. Whissel is not the only feather in Zions Abyss’ collective cap.

Zions Abyss entered Platinum Recording Studios in Edmonton and proceeded to crank out what is Power/Heavy Metal’s most obscure crowning glory, in ‘ T.A.L.E.S.’:  A cassette album that as of 2007 was re-released on CD and vinyl by the good guys at Steel Legacy Records who fly the banner for true Heavy Metal.

In my estimation: Rush were the best Canadian Metal band during the 1970’s.

Triumph were the best Canadian Metal band during the 1980’s.

Cauldron are the best Canadian metal band of the new century/ 2000 A.D.+.

Zions Abyss are arguably the best Canadian Metal band of the 1990s.

The ‘ T.A.L.E.S.’  LP is the one and only Zions Abyss album. The band played the bar circuit in their area of Canada for about five years until they disbanded.

On September 27, 1996, Andy Waitkus who played lead guitar/acoustic guitar and sang back-up vocals for Zions Abyss died in an automobile accident in the band’s hometown of Alberta, Canada.

An atmospheric intro, ‘Madness’, signals the lead-off track ‘Sorrow On The Horizon’  which clocks in at an eerie 6 minutes and :06 seconds.

‘Sorrow’ is an immense, catchy, heavy number. Serious lyrics that belie the youth of this band greet you with a firm brainshake — witness this line in ‘Sorrow’: The sun will not shine again / vengeance is the key.

Klaus Whissel stamps a Dio-worthy performance on this number that could have been penned by Ritchie Blackmore back in his Rainbow days.

Zions Abyss begin to take the listener on a Heavy Metal journey that starts with this song and lasts over fifty-six minutes.

Mike Plummer holds down the bass guitar and acts as secure anchor as the band slays their way through each song. Mike Plummer has also played with the Canadian Legs Diamond.

‘Darkest Dream’-  if dreams had a secret kaleidoscopic doorway, the path would lead straight to Zions Abyss. It is songs like ‘Darkest’ that make Heavy Metal so enjoyable.

Zions Abyss prove with their ‘T.A.L.E.S.’ album that they have the uncanny knack to touch the fanbases of many a Heavy Metal band.

Waitkus has a terrific sense of melody in his choice of musical notes that he plays. The listener is treated to sheer guitar mastery.

At around the five minute mark in this tune, Klaus Whissel’s voice soars up very high showing this man’s impressive vocal range. I’ll be darned if this don’t start to sound like Judas Priest’s “Dreamer Deceiver/ Deceiver” tune from J.P.’s 1977 third LP, ‘Sad Wings Of Destiny’.

“Changing Sands” lives up to it’s title and is the kind of number that will become a favorite once you have heard it a few times.

“Time Traveller”- the incendiary instrumental and vocal prowess demonstrated on this track will show you why Zions Abyss are truly Canadian Masters of Metal.

“Son Of Sam”- Mr. Whissel holds those high notes for a long time in this rollicking paean to the monster sicko ‘Son of Sam’; David Berkowitz the infamous serial killer who continues to rot in prison.

Upon close examination this is how it works with Zions Abyss:

When guitarist Andy Waitkus starts burnin’ up the fretboard of his gee-tar, Mr. Klaus Whissel responds with his best vocalizations.

“Serenity”- A flamenco-styled classical Spanish guitar is the perfect self played send off to the beauty of the tremendous musical soul of a man who once walked the Earth by the name of Andy Waitkus. R.I.P. brother.