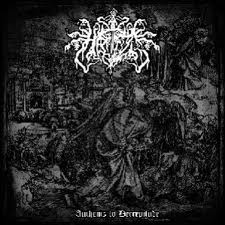 Answer these questions and afterward I will let you know if you will like what I have dubbed the world’s bleakest saviours – Hrizg and their Spring 2011 LP release ‘Anthems To Decrepitude’.

1). Do you really like Black Metal or is it just an act?

2a). If you are a misanthrope does being called one make you kind of proud?

3). Are you easily depressed?

5). Do you truly believe on sometimes that humans are like mosquitoes and that like mosquitoes we are just a flick of a huge finger away from not existing in any universe anymore?

6). Is the megalomaniacal side of your personality easily triggered by having someone listen to an hour’s worth of your nonsense by staying on the phone with you talking about nothing in particular?

7). Do you secretly hate the opposite sex when you don’t get your way?

8). Does just seeing the band name Hrizg spelled out on someone’s blogspot create a very hard to control type of attraction that has built up from the very fiber of your being?

9). Do Black Metal nonsensical logos with checkerboard black and white album covers make you feel a renewed sense of wonder for this often dull world?

10). Have you made one or more suicide attempts in the past seven years time span of your life?

11). Have you made one or more homicidal attempts at taking someone’s life in the last seven years and feel really good about the fact that the law didn’t get you to serve any prison time for what you really, really did?

12). Do you believe that a band named Hrizg with a studio LP being released in Spring 2011 entitled ‘Anthems To Decrepitude’ could possibly hold the key to renewing that sense of delicious morbidity that only Bathory, Venom, War from Sweden and Blasphemy from Canada could — and now only Burzum, DarkThrone and Dimmu Borgir still do?

13). Have you ever hated the fact that only you know of and hate Seventh Seal who did album of Christian Norsk Light Metal?

14). Do you secretly love DarkThrone but hate Isengard?

14a). If you still are reading these questions, do you secretly lurve Bathory but hate the Quorthon albums?

15). Do you have a tender spot for bands like Japan’s Samayoi who didn’t want anyone to hear their great Black Metal so they only released 100 copies of a Demo Tape and then did a Split Tape with a band that was only mediocre?

If you have answered yes to at least seven of the above questions then I have some great news for you:

Hrizg’s ‘Anthems To Decrepitude’ on Moribund Records will be your Black Metal sleeper favorite of 2011, so far, and is just what your local Euthanasiast ordered!

‘Anthems’ by Hrizg has at least three amazing highlights, that is if you are so inclined by way of having checked your answers to make sure you even should be reading this, which are:

‘The Infernal Scripture’ – Minimalist Black Metal Genious. It plain old sounds good. That’s it. The band clicks together like the parts of an expensive Swiss Watch made ingeniously inexpensively because the watchmakers had an uncanny knack to not have to be so darn complicated and yet pull off the job.

The lead vocals and the echoey infinity experienced on this cut and throughout the album make Hrizg instantly likable.

And chances are by the tenth listen you will love Hrizg.