I find solace in those who shun the light and even if the towering darkness lasts only till morning, I will be stilled.

It is from the dark recesses of night that I bring you Zwartplaag, Hhahda, Gorugoth, Frozen, Death Yell, North, Veles, Barathrum, Revenge, Moonfrost and Nachtwraak. 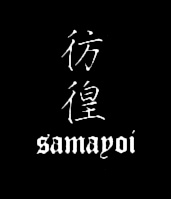 And now I will give you the top of  the Black Metal charred and burnt to a crisp mountain sanctuarium dwellers: The defunct Samayoi from Japan teamed up but one time only with the accursed Infernal Necromancy horde on a split tape that was limited to 100 copies.

Samayoi / Infernal Necromancy splitting a tape is what the tried and damned Black Metal head should be existing for.

If it sounds pitiful it is not.

The underground tape traders are usually a happy, garrulous lot, and quite possibly are all quite easily excited by rare recordings of the darkest musical outfits in the Black Metal worldwide bastion.

As in perfectly cold.

Bathory like trance strums on the guitar chime towards the end of this ten minute song.

You can feel the hate, the betrayal, the bitterness and the lies that causes the face to scrunch up in scorn filled confusion.

The Blackened Metal howling through the storm has ceased but the cruel rays of tomorrow’s morning sun loom heavy on the horizon as the tune comes to a close.

The magic of the night will soon be a bittersweet memory.

‘%oi<v (Towa)’ is the crazily titled other offering by Samayoi on this split tape. It is almost 3 and 1/2 minutes of controlled wayward Darkness Metal ponderousness.

Some have called Samayoi‘s music Melodic Black Metal and this tag doesn’t do justice to this force that is together no longer, from Japan.

Like band era Bathory, Samayoi were a trio that were comprised of Misanthropy on guitar/vox, Alabaster on drums & Vlood on Bass.

Infernal Necromancy shouldn’t have been billed first on this split tape, which has a cool running time of 24 minutes and 39 seconds, as Samayoi clearly steal the show.

Infernal Necromancy are no match for Samayoi.

For those of you shaking your heads out there wondering just what the hell bands I am babbling on about in this article/review, had better listen to, let’s choose Nachtwraak: A Netherlandic band with really good sound quality and a surprisingly large following that is 1000% Pure Black Metal as are my personal heroes Samayoi. It is too bad that Samayoi split up without having made a proper studio LP.

Let’s look a little closer at Infernal Necromancy: The band are Raw Underground Black Metal and more grindgore inspired than most.

I.N. are more like a cross between Canada’s Blasphemy and first studio album Belphegor, who hail from Austria.

Infernal Necromancy call themselves Necro Kultic Nihilists, which seems like a haphazard term to be using.

An interesting thing to note is that Infernal Necromancy finally, after years of splits and demos, in 2008 released a im/proper full-length studio LP.

Unfortunately, unlike Samayoi, I.N. have a childish, all over the map approach with knuckleheaded adoration of tyrants, despots, aggressors and dictators. Savre fare for the morons, methinks.

I highly recommend seeking out Samayoi‘s 2006, four song 23+ minutes long tape on the Underground approved Drakkar Productions. The tape is entitled ‘Mournfulness‘. ‘Misanthropy‘, the song that I have aforementioned from the Samayoi / Infernal Necromancy split tape appears and as such is a treat for lovers of True emotional Bathorycal Blackness.

« Hrizg – Anthems To Decrepitude Before The Dawn – Deathstar Rising »