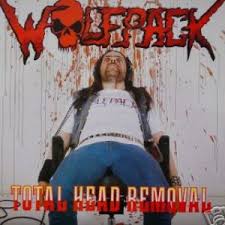 As is evidenced by the “Fast Forward To Hell” compilation, on the brand-spanking new label,  Metalworks, the English death/thrash metal invasion is upon us as you read this.

There’s all kinds of new blood on the scene with actual vinyl- (The U.K. pick for success) – Sabbat – real soon;  the revamped Atomkraft, the more metalized Concrete Sox, Sacrilege, Virus, Deliverance, Deathwish, Satan’s powerful return – (o.k. they are not thrash but the name get thrashers involved):   God knows who else is right around the corner.  Maybe demo hopes like Hellbastard, Lord Crucifier, Death Warmed Up, Hydra Vein, Acid Reign, Xentrix (this name may be new to you all) will put something onto ’round form’ real soon!

Oh yeah, and then there is also new U.K. vinyl that’s out by Napalm Death , and last but certainly not least-with-the-goods is Wolfpack. Wolfpack  are atypical of this new breed of U.K. thrash acts.  They don’t rely on Slayer/Exodus/Metallica riffs but basically their own brand of powerful thrash/death metal with that catchiness that only the “bloody” English seem to have.

Side 1’s “Full Scale Attack” starts this Wolfpack album at full-bore, and through numbers like “Hell On Earth”, “Devil’s Child”, & the best cut- “Death By Default”, Wolfpack ram the point home again and again that they can thrash out with the best of ’em.  If I was to describe them to someone I would say that this band is a faster, thrashier, nastier version of Virginia, U.S.A.’s, also trio, At War.  And no, no, no, they don’t sound one bit like Motorhead as a few tabloids have said.

There is no criticism for Wolfpack and I am putting them in my top 10 of 1987, no matter what!

And kudos to Chain Reaction Records who promise to keep the thrash vinyl coming hard and fast!   P.S.:  That is going to be a tall order if they only concentrate on England as the British are eclectic and very original by nature – which for the average buyer is both good and bad.

But hey the Beatles and the Stones will always reign on top of the rock roost, so that’s it for fortune tellin’ now!

« Sacrilege – Within The Prophecy Kiss – Psycho Circus and Sonic Boom »