Sacrilege – Within The Prophecy 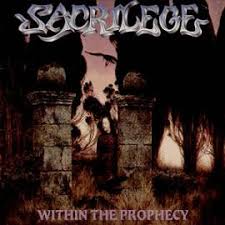 Is this the same Tam that sang that nifty, little punky/hardcore ditty , entitled “Skinned Alive”?!?

Yep. My how serious we have gotten.  This album is thrashing, heavy, intense, and very long. It is something like over 43 minutes long for 7 songs. Candlemass  they are not.

And though it won’t win me any popularity contests, I do think little Lynda (Tam) Simpson sounds quite lost amongst the dense foray of Marshall stack sound.  She is drowned out and it’s just as well since she don’t have the slightest idea how to sing music as technical as this.

Tam tries her cute talking style and that don’t work here. Tam also tries her shouting punk voice that used to work oh-so-well.  Now it doesn’t.  (One may even appreciate Wendy O Williams’ singing more after listening to this album).  Fast forward to the last song on “Within” and Tam gives it a singing try; said track being “Search Eternal”.  Lo and behold it is the album’s saving grace, as for as her lead vocals are concerned.t “Search…” is 10 minutes and 52 seconds long. But, as they say, too little too late.

I think that once Tam got rid of the hardcore guitarist who made the mini-LP of a few years ago, entitled “Behind The Realms Of Madness”, work real good, is now left with a bunch of guys with improving musical capabilities to leave her far behind.

So it is not something that I feel could have been improved by raising her vocal levels in the final mix of this LP. Simply, Tam is a punk rocker who is in a now decidedly metal band.  Sacrilege need a “singer” or another kind of powerful individual behind the mike.

Let me also add that until that time comes, it may be wise to put Andrew Baker, their drummer, posing front and center for press photos.

Maybe, having said all this, there may be enough talent on display on this record to merit checking this disc out. That’s if you have the cash to expirement;  y’know what? Ask ’em in you local record joint to play you a track as the “Search Eternal” may be what make this worth it for ya.

Making punk and metal mix together has never been an easy task unless it creates a new subgenre.