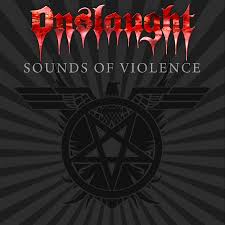 Well, Onslaught reformed earlier in the decade and though the guitar work can be a thrill on this new album and the production quite superb, it’s just not enough for me.

Onslaught try to be Deicide-like in their hatred of Christ. Check out a song called “Killing Peace” where they lyrically ‘spit blood in the face of Christ. I think Dark Angel and Slayer do that better.

Now for the good side of this album: Onslaught stamp out death metal with authority with crisp & clear riff work. “Godhead” is the best song because of this. Smack dab in the middle of the album are these great Middle Eastern metal riffs with an elegant well defined guitar solo, to boot.

This is what got me to take notice of Onslaught back in 1985 with “Power From Hell”, their debut album.  “Antitheist” (kudo for the smart word – I dunno) also excels guitar wise. Strange, though, is the track “The Sound Of Violence”, which sounds like Rush’s new style heard on their “Caravan/BU2B” single if it were death metal!

Forbidden, Testament, Heathen, Death Angel, and Dark Angel fans may have some interest in this release. The cover of “Bomber”, originally done by Motorhead, is superfluous and should have been left off the album. “Into The Abyss/Born For War” is Slayer worship circa-1990 “Seasons In The Abyss”. “Code Black” is the worst song on here because of the Obituary-esque growls sound forced along with a riff sequence that doesn’t have any catchiness at all. And the Nazi-Germany-Iron Eagle- mixed with a drawing of the pentagram for album-cover art in 2011 is below contempt.

What I always found strange about Onslaught is that almost none of how they sound sounds anything British-like. Is that why they think they can release a Motorhead cover that has been done to death?

This review came out more critical than I had first perceived.

I am a fan of this band and I expected much more. My inclination is to think that there wasn’t enough thought or time, or something, put into trying to make these “Sounds Of Violence” something special.