Like a pizza shared amongst friends on a weekend night, Kiss albums are truly like the song says on “Psycho Circus” – “You wanted the best, you got the best!”.

Amongst other things, the sheer transparency of this rock institution is what remains so endearing to me. Not to mention that Gene Simmons & Paul Stanley, bass/vox and guitar/vox, respectively –  really do know what  hard rock/metal is all about.

I will pick out a few Metal acts by name here and ask you this question:

Why do you continue to care about their new albums?

Haven’t we heard all this before?

Are you starting to wonder what the attraction to a band is when they have used up all their good riffs, been through their best line-ups, truly had their day at the top-of-the-charts, etc.

Who is buying their albums?

Here is the answer, and try as you might, there is no better one. It’s “only rock ‘n’ roll”; hey- roll out the cliches! Why do you and your friends continue to order a pizza every now and then when you get together on a weekend night? You like it. It’s cool. You’re hungry. Who cares. It’s Saturday night. We couldn’t think of anything else to eat. Shut up and play yer guitar!

“Psycho Circus” was penned & released in 1998 and “Sonic Boom” came along a lot later. What we need to do now is to go back to what came before these two releases. “Sonic Boom”‘s album cover looks like “Rock And Roll Over” from the 70’s! (Just throwing in a visual, here, for you all).

Get ready, though, as we’re gonna go back to the 1990’s since that is where ‘all-things-Kiss’ finally got to the point where, as one ‘journo’ wrote, prophetically, back in the1970s: “The fans will either grow up or throw up”. Well there goes that pizza analogy again.

Now here is where you really need to follow me. Kiss doesn’t sound Rush these days. And yes, back in 1974, when both bands put out their debut LPs; they were more alike than they were different.

Now, if you are starting to scratch your head with the first twinges of a headache in store, that’s ok! Hard Rock and Heavy Metal are emotion, feelings. Like people we love. We don’t just stop lovin’ ’em do we? I hope not. Not in my case, anyway. In other words, if you wanna spend your time listening to Kanye West because he is the ‘new thing’ to do, then do it! Though, that would be ‘high treason’ as I assume everyone reading this is die-hard rock/metal fan.

The band Piledriver may not be known to all you Metalheads, but they came up with a very Spinal Tap-esque song-lyric  on their “Metal Inquisition” album from 1986: (and here lies the message)- “If you’re not a Metalhead you might as well be dead”.

At this point I will break from my Rock Sermon and take our ‘Time Machine’ back to the 1990’s. (Whirring noises begin and a big ‘whooshing’-sound blasts us off)

The first thing you will notice stepping out of the ‘time capsule’ is the “tie-dye” taste in your mouth from “Animalize”. It is the last real memory of the Kiss we grew up with. What songs were on “Animalize”? You mean you don’t remember “Heaven’s On Fire”? Sure, ya do. This review is custom-made for the baby boomers who had rock ‘n’ roll dreams yet had to settle for becoming dog groomers (in other words, walking your newest lady thrill’s dog on “the morning after”).

Eric Carr is on drums and Mark St. John is on guitar. So the Kiss plot to take over the world has already ‘sickened’! Closer to being a memory, since we travelled back-in-time is “Lick It Up”, from 1982.

This is the last of the old time Kiss years & may even remind some of you of your first ‘bl**job’ (giving/taking).

The ‘time capsule’ gets it’s tank of gas and we’re off to where we originally wanted to go in Kisstory: 1994. We step off to find ourselves thoroughly ensconsed in Sao Paulo, Brazil, for the “Monsters Of Rock” festival where our heroes take the stage amidst the smoke-of-the-stage & the smoke-of-the-crowd! Kiss play “Creatures Of The Night” and we squeal in glee at this hurdy-gurdy memory! It sucks & we don’t care! It’s loud. We’re high. Who cares?

The big grins on our faces are erased as the new studio material is grated out by Mr. soon-to-be-$$$-bags- Gene Simmons & co.  I scream “check this out fifteeen years from now on YouTube” to some chick with big ti**ies but she don’t hear me.

Two years after Kiss’ “Revenge” LP came out in 1992 and we are begging our pilot to take us forward in time! But where do we go? The Kisstory nightmare continues, with 1997’s “Carnival Of Souls: The Final Sessions”, which makes things sound like the band went down in a plane crash in 1996, or something!

All this, goes to prove, ‘Kisstory’ is one scary place, man! Just then the word “Reunion” pops into our heads. Huh? What’s on goin’ on? OMG. Just then the curtain rises for another Kiss concert.

The original Gene, Paul, Ace & Peter hobble onto the stage along with a cast of other current ‘Kiss-players’ to do the “acoustic thang”.

Kiss sit on bar stools, having arrived at their ‘middle ages’ to deliver “Rock and Roll All Nite”, acoustically & “Unplugged”!  And, yep, just like pizza burping up the ‘ol windpipe two hours after you have eaten it, these mid-’90’s acoustic ditties are released as a ‘lifeline’/ a dhingy boat, if you will, for the Kiss army to salute.

So what is on “Psycho Circus” from 1998? Better yet; who are the musicians that year who make up the band, Kiss? The Kisstory was so horrifying on our ‘time machine’ tour -of-the-past  we totally avoided these discs.

But we’re back. And hey, it’s freakin’ 2011 and Kanye West is all the rage. So, now is the time to fully appreciate yesterday’s pizza; I mean, Kiss!

The lead-off track on “Psycho Circus” is, indeed, the title cut, co-written by; we need a
drum roll– Curtis Cuomo/(a.k.a.: WTF!). And this song is great! It has “flashback” to “Fractured Mirror” from 1978’s Ace Frehley’s solo-album written all over it. (Maybe, at this point, you will want to google the name Curtis Cuomo. Nah. I didn’t. But let me know what happens okay?).

Next up is “Within” and it is a Simmons-penned number, which is skipped. Now we have the pens of not only Curtis Cuomo, but Holly Knight(?!?), co-penning “I Pledge Allegiance To The State Of Rock & Roll”. This is a big, fun, loud and raucous hard rocker. I don’t care how this may sound to all of you; but Kiss=Fun, in my book!

Go right ahead and check out back-to-back how serious it all has gotten with Disturbed or Red. Yes, they are great bands but that fun element is the one good thing that Metal picked up from it’s Glam Rock days.

And if you think about Nikki Sixx from Motley Crue picking up his ‘dreamboat’- Pam Anderson and screwing her silly for years, well, you may start to understand what this ‘beast- called- R-O-C-K’ is really about! Okay. Enough with the ‘sex talk’!  There is some nifty fretwork going on here. In other words:

That freakin’ guitar soloing is amazing! Let’s skip to “Raise Your Glasses”. Hard Rock & Heavy Metal songs, throughout the years, often sound ‘disturbed’ & ‘angry’. This is not the case with Kiss! How many of you go to work each day and truly love your job?!?  I think these guys, in Kiss, do!

At a time in human history called post 911,  most New Yorkers (and Kiss are New Yorkers),
started to become coy about going out & having a good time.

As for the rest of the album it all sounds like whole lot of fun. That’s a good thing, right?
“Sonic Boom” is the current Kiss new-album. Their 19th studio album. Not as fun as “Psycho”. It is still surprisingly good. Kiss have nothing more to prove to anybody and are just having a good time.

A good, honest, slab of Hard Rock is what is on offer here. 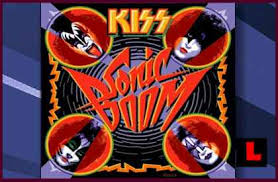 “Sonic” has three singles on it:  “Modern Day Delilah”, “Say Yeah”, and “Never Enough”. “Modern Day” has Paul Stanley’s coolness written all over it, and it is the best Kiss song I have heard in quite a few years.

“Say Yeah!” is so simple, yet it works so well. Did you ever hear that one about Kiss: the one that goes; Kiss means ‘Keep It Simple, Stupid’? Well, it unashamedly true. They sound good. They look good. They got tons of money. Simple solutions that a lot of bands wish they had “insight” into. “Sonic Boom” benefits from a production that brings back memories of the best Kiss albums ever made. I got an idea.

Okay. Here is the big point about this whole article:  Had “Sonic Boom” been released in 1999 and not, as it is, in 2009; This being Kiss’ first studio album in 11 years, it would all make sense. But it wasn’t. The magic of Kiss is that they are not only still around but they’re also still kickin’ ass. Kiss are: Immortal. Fun. Professional. And just like pizza, well; Kiss ‘delivers’.

Go and buy this at the neighborhood record store and take it home and crank that s*cker up!