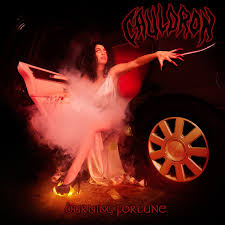 Out of Eastern Canada; Toronto to be exact, comes Cauldron with their second helping / second longplayer.

More Witchfinder General than Kataklysm or Cryptopsy. There really is something special and refreshing about bands from out of Canada. Keep in mind that Rush are the most original rock/metal band of all time & this being from the same geographical region of Canada that Cauldron hail from, is noteworthy. Rush are a rock institution up North like the United States just wouldn’t believe. Rush are undoubtedly an inspiration/influence to any Metal band that rocks from up there.

Let me state flat out: Cauldron are great! I haven’t said that about any new band, from Canada or elsewhere in the world, for what seems like ages. “Burning Fortune”, released on February 15th, 2011, is brand spanking new. Tracks like “Miss You To Death” is not about rotting feces, which is all the rage these days; rather it is about the girl that got away.

Take one look at that beautiful vixen-like creature with the huge, long, fingernails staring back at you from the album cover. The riffs on this LP are instantly catchy. A slight Nirvana-like feel can be detected. Even listening to the band talking about there being ‘no hope and desperation’, in a YouTube interview vid, strikes me as being quite upbeat.

Earache already have Wizzard and Enforcer but Cauldron has ’em all beat. “All Or Nothing” is about the band feeling that they are gambling with their lives. “All” is a thrashing number that is, musically, as ‘ace’ as it gets. The guitar solo is so darn tasty and steaming. I am running out of poignant adjectives to use, actually, ’cause this album is just too good to be believed.

Listening to Cauldron makes me realize just how many of us have fallen into a doom ‘n’ gloom funk since the World Trade Center bombings in New York, in September, 1991.

I detect early Accept circa “Breaker”, in the riff machine of guitarist Ian Chains.
Take a song title like “Queen Of Fire”. A simple song with a simple song title. In a day and age where bands like Dream Theater, and Red crush us with heaviness and complexity.

The only clunkhead in the band, though, is the drummer. His stupid pentagrams design on the bass drums have just got to go. Or he has got to go. I don’t feel like even namedropping what he calls himself. That Satan image does not compute with Cauldron. It is like Rob Halford coming out singing in a pink jumpsuit. It’s just plain stupidity.

Back to the superlatives: Mark my words. The third album, and I hope we don’t have to wait to long for it, will undoubtedly be a stone-cold classic.

The bonus track is “Serpent Sorceress”. They should drop stuff like this and streamline their good stuff. The only band that ever had this beauty, is perhaps Triumph, and they hail from Canada.

Like they say: Every snowflake is different. Cauldron are, indeed, great.