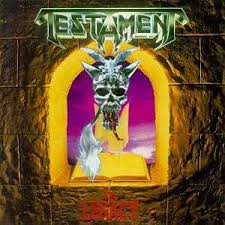 I want everyone to know that I’ve always felt the ‘Bay Area’/California, in general, to be inferior to the thrashing going on in Germany, Brazil, Denmark, etc., despite the seemingly endless number of bands and success stories (Metallica, Possessed, Exodus, Megadeth…). I guess it’s because I am from New York City, New York, U.S.A., and the grass always seems greener on the other side. Anyhow, the vinyl coming from the Bay Area, in 1987, continues to astound me; Testament have me lost in a ‘technical’ ecstacy’ of weaving guitars, “clear-as-a-bell” sound, raging vocals, and endlessly thrashing, heavy rhythms from the git-go.

Every song bursts with the adjectives I’ve given Testament’s (ex-Legacy) debut LP. I’m content to know that this is major label stuff, too. Atlantic Records is pretty darn for the underground. This means major label distribution and more money for Testament.

Testament first appeared on vinyl on that infamous San Francisco compilation LP, “Live At Ruthie’s Inn”, as Legacy doing “Reign Of Terror”. I thought that the track was great but in need of a different style vocalist. The vocalist on that track and for the band at these times was Zetro Sousa who I don’t think quite fits Exodus’ style, either. But it’s too late as Mr. Sousa is now a full-time member.

It’s Testament who had the insight to bring in Chuck Billy who fits the part of lead vocalist to a tee.

It bodes well for the future of Testament since the two songs I just mentioned are the newest and the deadliest. As great as this album it still won’t be enough. This year was a banner year for great albums by great bands. It might not make my top ten. It is 1987 and the year of 1984 with Celtic Frost, as an example, releasing stunningly heavy music, is now showing why heavy metal is now to be taken as seriously as a heart attack!