Here is the battlefield:

On one side we have that fun war machine known as Wehrmacht and grinning maniacally at the opposite end we have Napalm death (and talking up a storm of hodge-podge). 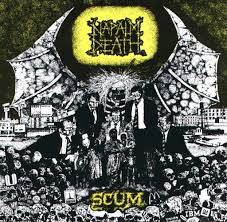 Napalm Death: The sticker pasted on the album cover reads “The undisputed World’s Fastest Band, 28 songs of intense, manic and savagely brutal hardcore-thrash”. I’ve seen many stickers in the laswt few years characterizing the seemingly aimless race of who’s the fastest band. I found this LP in the metal section of my nearest record sanctuary (which ‘ain’t that near), so I am glad to see that Napalm Death are competing with the metal boys who have the harder task; metal bands must combine blinding speed with a decent amount of power to be embraced by thrashers who like it heavy.

So bands who boasted mind-boggling speed like A.O.D., Heresy, Executioner (Boston). Septic Death, Hirax, Intense Mutilation (would you believe that these guys had the nerve to finally put out a studio demo after years of ripping off their loyal (choke) fans on zillions of rehearsal tapes and ’nuff said about I.M. the better), jokesters Spazztic Blurr and Crab Society, and many more including Maximum Rock ‘n’ Roll’s (the punk afficionado newspaper) endless stream of bands ten times more obscure than any band that I could possibly name drop, all have achieved that past-the-speed-limit approach to varying degrees of success (except I.M.), depending upon how tight the aforementioned bands’ blinding speed assault is, is the simple key since the hardcore side of things is easier to execute, almost without exception. (Are you following me?)

I was dubious as to death/thrash- metal bands breaking the sound barrier while retaining the heaviness while still holding up the tightness and still keeping each song distinguishable from the next.

Brutal thrashers like Volcano, Messiah, Insanity (Cal., U.S.), Nuclear Death (Arizona, U.S.), and Possessed, to name a few, go as fast as is necessary, which sure ain’t slow!

Cryptic Slaughter & Concrete Sox, Morsure, and Wehrmacht are the most metal to try the flat out speed approach. After hearing and believing Wehrmacht’s blurr-upon-blurr debut LP I thought they could not be beat by anything else comitted to vinyl. Well Napalm Death don’t exactly ‘beat it’: Napalm Death remind me of NME on 78 r.p.m. They are tighter and more powerful than I expected and the singer is death metal enough to replace Carnivore’s Lord Steele, which is quite a feat in itself, and I’ll be damned that despite the fact that songs could be a little longer, the sticker I quoted (go back to the beginning of the review) states the truth and nothing but. Hey. Bombs away!

Wehrmacht: Now for the other band vying for the ultra-speed spot. It’s Portland, Oregon, U.S.A.’s Wehrmacht, who are just as much fun as Napalm Death, incidentally of the U.K., except that Wehrmacht are heads-down-technical as hell, being neither speedcore or metal.

I have come to the conclusion by way of their clear intent to be as original and creative in their songwriting defying the seemingly impossible task: Wehrmacht’s “Shark Attack” LP, track-by-track:

Shark Attack: Introduces us to the new stuff- sounding even faster than on their “Beermacht” demo due to the new found tightness, in the band, which also allows Wehrmacht to get more technical.

Blow You Away: The riffing is a typical hardcore riff but the ‘on the mark’ vocals and tremendous lead guitar work bury the punk aspect of this band for good, methinks.

SOP: Jabberjaw: B.O.S.: The speed starts increasing, along with a vomit spew of words gathered, haphazardly,together. Flying past, Wehrmacht pour on the speed & tightness so, so well. You know, it is almost unbelievable that this is happening at all. On my stereo is something alien to this world. Humans don’t usually go at these speeds with any degree of certainty. Wehrmacht are doing more than playing music. They are experimenting with the very fabric of reality. Yes, this LP is a landmark in extreme music history. Of that I am sure.

Part II: Go Home: Anti: Wehrmacht throw in a few varying time-changes and more than a few curve balls. It does, admittedly, get a little hard to follow at times. But Wehrmacht are making their mark. Let’s bend to the music. Let’s approach this openly. Wehrmacht are showing us something new. Let’s throw away our cynicism and our pre-prepared approach to being a fan of music.

Crazy Ways: Very original yet strange-sounding chord patterns. The best example of what Wehrmacht is all about is this number: Fretboard Gymnastics: No it’s not Joe Satriani, of course. Instead, let us take the speedy strangeness going on on this disc, and add almost completely offbeat jazz timings while still thrashing/moshing like mad. This track is an ‘instro’.

Termination: The only song that made it to the LP from the “Beermacht” demo and I can see why. The band have improved in leaps and bounds. I did have high hopes of hearing “Suck My D**k”, Wehrmacht’s perverted anthem, on vinyl. Maybe it’s better that it was left off this album.

Wehrmacht and Sadus are the leaders of high-speed hijinks.
Complete ground-breaking stuff. And the winner is Wehrmacht.

If ya wanna weigh in then buy both of these albums.

Sit back and get yourself bombarded!.