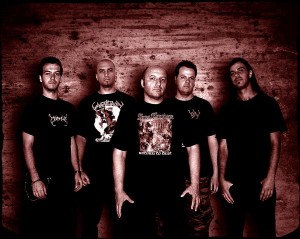 The scene in Greece for Black Metal is prefaced by these bands, all who have passed into legend: Rotting Christ, Septic Flesh, Thou Art Lord, Necromantia, Nightfall and Varathron. The ’90’s brought this bunch into sharp focus. They each were quite different, with separate endearing qualities to each, yet undeniably with a feel for the darkness and gloomy doom that is part and parcel to Black Metal’s very definition. Nightfall and Varathron top my personal list for all-time faves from Greece.

I will say that Thou Art Lord. struck hard last year with their latest album, the popular “The Regal Pulse of Lucifer”, keeping the thunder from Greece — and it’s plume of black, acrid smoke alive (undead).

Thou Art Lord’s “…Regal Pulse…” leans, though, unlike Varathron’s newest into a Black/Death mixture — especially due to the deep growling vocals, with a fixation for the horned one. With Varathron there is no Death Metal music present.

Varathron have made 5 full-length studio albums since their inception in 1989. They also are no stranger to the dressings of the goatlord. A cursory look at their website,varathron.com, informs immediately of the adherence to their ideology. The thing with Greek Black Metal bands singing about Satan, is that they are utterly convincing, as they do. It is a hallmark of Greece that started with the band Flames, who had one of the first 100% horrifying album covers. It was on par with Mayhem’s I-shot-my-brains-out-and-then-the-guitarist-snapped-a-picture #1 OTT album cover “Dawn Of The Black Hearts”. Yet, thankfully, with no lives taken (I would hope!)

The point I want to get across for those who don’t know the whole of the history concerning Greece and Black Metal is what a mecca the country is for this enduring, awesome Heavy Metal sub-genre..

Like their compatriots, Varathron with “Untrodden…” as per usual are utterly convincing and thoroughly credible, the music taking a plus from it’s non-feigned allegiance to the dark side.

Varathron shared an album in 2012, “Emissaries Of A Darkened Call – Three Nails In The Coffin Of Humanity” with Black Altar and Thornspawn, Varathron dealing out 3 tunes including Black Sabbath’s deep cut “Ancient Warrior”. It is testimony, actually to all of Greek’s fanaticism to Heavy Metal in general in all it’s forms, to do something from 1987’s “Eternal Idol” which is not the usual Sabbath album that bands choose to copy tunes from. Certainly, it is an excellent 13th studio album for Black Sabbath. What Varathron do with this Tony Iommi showcase cut,  is add a brooding menace to it and yet keep the faith while making it a dense romp..

Varathron also were busy flapping their blackened wings in 2012 with  the 16-track album, on Nuclear War Now records, called “Genesis Of The Unaltered Evil” which tracks through the compilation a herald of a subterranean, glorious journey that the band have taken.

(Genuinely) SPOOKY is the one word to define Varathron. And if you are serious about listening to the best there is, then you should have at least heard the album already (if not own it) or please get set to put it on your list so as to acquire Varathron’s crowning achievement, the straight-forward Sab-like stomp of “His Majesty At The Swamp”. With throaty whisper-like commandments, it is part of Metal’s heroic history.

Back to the present day, Varathron are synonymous with pitch black darkness and seething coal-black atmosphere. Despite the above-mentioned split-LP release, their last in-earnest studio effort dates back five years with “Stygian Forces Of Scorn”. Steady as she goes, as the doomy dankness of past Varathron albums, all either great or just bubbling under (like a witch’s cauldron) can now add stand-out tracks like  “Untrodden Corridors Of Hades”. “Realm Of Obscure”, “Delve Into The Past”, and “Arcane Conjuring” to the list of gloomy prolific, monolithic slabs of greatness that this largely unheralded band produce so solidly.

Check out the performance of Stefan Necroabyssious who fronts Varathron with a scary voice that would befit a main character from a horror movie. And the vocals this time around have been taken up a mite notch in good ‘ol spookiness!

Varathron lead the listener into believing their tales of a world below. Descending into the maelstrom of powerful guitars and keen drumming, the band are masters of their chosen (spell)craft. 7 tracks clock in between 5 and 7 1/2 minutes, with each song the tension builds and the characteristic Varathron moodiness shines through.

The production and mix on this new platter is very adequate.

Just as the cold winds start to blow in November 2014, Varathron have struck with the reaper’s scythe again, ensnaring the unsuspecting denizens of darkness listening, with the certainty that they will make thy head bang and thy ears clang, as good or better than they always have. Those headphones?

Strap ’em on for this treat from the Underworld.

Hey it is strange, isn’t it, that evil never dies though must of us will?

Tom Warrior of Celtic Frost with the ageless Mid-1980’s call of “Are You Morbid?” is another question to try on as Varathron’s well-trodden path of black spells blazes from your speakers, as you come to the realization that few bands really sound like they mean it as much as Varathron does.