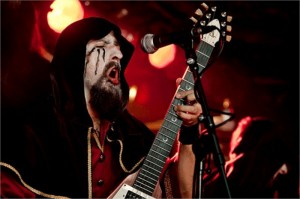 Mortuary Drape are a band from Italy that pretends reality is one long Halloween. Yet there is nothing goofy at all about them. Equal parts Black and equal parts Death and yet at the point where being together 27 years has made them now, after a 10 year absence, an amazing band that deserves your attention. You don’t need to like Cradle Of Filth or Absu because the ‘Drape have reached for the silvery moon and slingshotted themselves to the stars. Original enough to be dubbed Gothic Occult Metal in 2014.

The brood of Mortuary Drape wanted attention and by the ever-present coffins and whatnot; just their bat-winged logo on their debut EP carrying the odd name “Into The Drape”, was information enough that this band would become something special. Italy already has the reputation of twilight strangeness: Bulldozer or The Black are two easy examples among many. Italy is a country that knows how to weird out Heavy Metal, and take it to the extreme.

Ten years ago the band’s last album “Buried In Time” came out. “Spiritual Independence” is a natural progression from it, but not a good barometer to use for what your ears will delight to.

The drummer, Wildness Perversion plays a kit that even Neil Peart of Rush might give the nod to. Drums and cymbals everywhere, and the man is back in action — returning to the ‘Drape fold.

I love the production. It is as huge as Bring Me The Horizon amazes with in their own Metal sub-genre. Gothic and straight-forwardly odd and bold, yet as heavy as a band like Sodom or Kreator at the same time; this time Mortuary Drape have got it exactly right.

The one stickler though, Mortuary Drape had to compete against their own macabre, heavy musical invention: “All The Witches Dance” has been exalted in the annals of Death Scream, as a scorching debut LP. A masterpiece of wicked spellcraft, the next two albums would come close to it but miss the mark. There’s a band named Evol actually comped Mortuary Drape’s approach, and to listen to them is to understand the unapproachable platform of pitch blackness that Mortuary Drape occupy.

The self-professed “left-hand preacher”, Daniele Cagnotto, (also known for his stoned out Doom Metal band Lymph of Wisddom that unfortunately dramatically came to a halt) is the driving force for Mortuary Drape. He does lead vocals and guitars.

You may feel a little funny though standing in the morning sunlight after Mortuary Drape have issued you your spiritual independence through the ritual of enjoying the coffin-box encased disc’s aural treats.

Don’t worry, you can listen to it again when night falls.

The late November 2014 release of “Spiritual Independence” is going to take a lot of people by surprise who give it a chance.