TWISTED TOWER DIRE To Release ‘Make It Dark’ In May 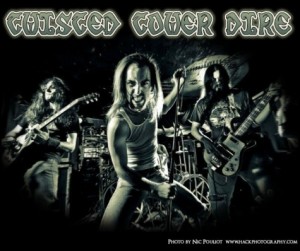 Virginia-based classic metal outfit TWISTED TOWER DIRE has completed work on its fifth full-length album, “Make It Dark”, for a May 3 North American release via Italy’s Cruz Del Sur Music. According to a press release, the CD is “probably the most mature album the band has written to date. With a direct approach, the band has been able to write a very compact-sounding release, made of some immediate hit songs as well as others marked with more traditional TWISTED TOWER DIRE taste. ‘Make It Dark’ is the sum of those elements which are the pillars of rock/metal music in general and that are so greatly expressed by the band in this release: guitar and vocal melodies above the standards, catchy refrains and most important of all, the feeling that each and every one of these songs bears the potential to become a new metal classic! Strengthened by Chris Salamone’s (WHILE HEAVEN WEPT) post-studio work, it features cover art by U.K. artist Martin Hanford (SLOUGH FEG, BAL-SAGOTH, WARHAMMER).”

TWISTED TOWER DIRE’s name has been synonymous with uncompromising classic heavy metal since the band’s inception in 1995. Formed out of “a stubborn hatred for the ’90s anti-metal culture,” the group has always been able to maintain a respectable profile, not following transitory trends but keeping true to their original metal beliefs.

TWISTED TOWER DIRE’s next live appearance will take place on May 20 in Raleigh, North Carolina.