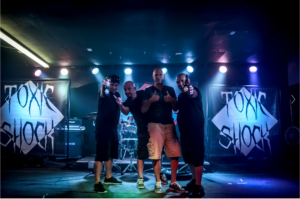 (Originally from New York), Toxic Shock had a great day when they wrapped this puppy up. Toxic Shock, now calling Orlando Florida their home, are yet another band not trying to re-invent the wheel. Rather, as a cohesive bass/drums/guitar/vocalist unit they are grooving with their own Nu Metal meets Bay Area thrash metal. The only minor quibble that I have is that ,in 1992, the thrashing Metal band — Toxic Shock, from Germany, released the “Between Good and Evil” LP.  Thus, a name change might be in order. It wasn’t that Toxic Shock from Germany became anything more than a cult band with a special LP, yet I feel that it is, perhaps, an important thing for these gentlemen to have a good look at. Yet, let’s put aside this minor quibble when there is so much firepower being thrown around on stage by these young men. They look ready, they look able, and they sound good.

Ray Bell and Bruce Ryder, (singer and guitarist, respectively), have had to carry the band forward following tour requests that came about from some successful club shows in New York and the resultant exit of their former drummer and bass player.

Requested  to travel along to play on the same stages as name bands, Toxic Shock began to dig in after their eventful year of 2014. “Land Of The Free” and “Show Me The Light” are some of the solid, heavy songs that have resulted, and earnestly make up the band’s canon of muscular, sure-fire songs.