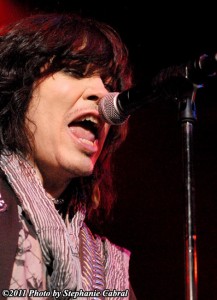 Metal Shrine: The stuff that happened with your voice in ’91 and then in 2006, did that make you a more careful singer? Thinking more of in the way you sing these days.

Tom: Well, I work with voice coaches, so I do a lot of therapy and keeping in shape. Kind of like the equivalent of working out with your voice. What initially caused the problem was a neurological problem, called pareses, which is a fancy medical term for partial paralysis. What happens is that one side of your voice box doesn’t work right and you have to retrain it and it’s very difficult to do. It’s a condition that in most cases is career-ending, so it’s really been a struggle for me. Since ’91, it has been, but it got even worse in 2006 towards the end of that tour. I guess part of the problem was not getting the right kind of training, which I learned a couple of years ago. I went through a bunch of different voice teachers and the last one that I found a couple of years ago, who I’m still working with, was just a better teacher and he taught me things about my voice and how to support it and how to make it work. I’m pretty confident this time that it’s behind me, because it feels stronger than it probably ever has.

Tom: Yeah, it’s a relief. (laughs) Planning a tour and going out and singing and playing with the band is actually starting to feel fun again. For a long time it’s been just scary and uncertain and not how it used to be. It’s starting to feel good again in all aspects.

Metal Shrine: The first time it happened, what caused it? Just a random thing?

Tom: Well, the onset was in ’91 towards the end of the “Heartbreak Station” tour and we didn’t know what it was at first. I went to a lot of different doctors and they were looking for more common voice ailments which were things that they could see with their scope when they look down your throat in their office. It could be like polyps or knots or things that are actually kind of like growths on the vocal cords themselves and more obvious to see. With a neurological problem, that’s the nervous system and its signals from the brain to the muscles, telling them what to do. It was the left side of my voice box that generated the signals, putting it in layman’s terms, I guess. It just wreaks havoc on your voice and it’s not from singing incorrectly or anything like that. It’s actually caused by viruses, something even like a common cold virus if it lodges in that nerve, it can degenerate it. It’s very random and it’s not fun to get if you’re a singer.

Metal Shrine: What about a new album then?

Tom: There’s nothing on the horizon right now. We attempted that in ’98 with Sony and [former A&R executive] John Kalodner and it turned into a big legal hassle and lawsuit, which prevented us from recording the material that they claimed they owned, for five years.

Tom: Even though they didn’t want to record it. It’s typical in recording contracts. It’s called re-record rights. Once they claim they own the songs, you can’t re-record it for five years. They claimed ownership and decided not to make the record. It was like two years of writing and demos of material that we weren’t allowed to record. Needless to say, we had a slightly bad taste in our mouth. We kind of recovered from that and got our heads back together and in the interim everyone was kind of working on their own projects and I started a solo record and Eric [Brittingham, bass] was doing something and everyone was doing their own thing. The band just continued to tour and we did two or three more tours after that and then the voice problems hit me in ’06, so it’s kind of been like one thing after another. And for, like, the last six, eight years, we just feel like we’ve been hanging on by our claws and the thing that just always works for us is touring. We go out and we tour and we have fun with our fans and then even that went away in ’06 when that voice stuff came. We were off the road again for four years. Last year was kind of like starting over again and we went out to tour. In terms of a new record, it’s not that there’s a lack of desire, it’s just that we’ve had a lot pushing us down that we’ve been trying to crawl back from. The last four years before the tour last year, I think we were all just more worried whether we were even gonna be a band again, because the stuff with my voice was so serious that the future of the band was literally a question mark. Last year we were getting our legs and we’re getting back on the road now, so… to answer the question of a new record, it would be great to do. I know it would have to be the right situation and a label who is really serious in making a great record and producing it right. You never know. We’ll see if that opportunity pops up. I’m getting ready to put mine out, hopefully this year. I’m shopping for a deal right now. I wanna see that through and you’ll never know what the future will hold, but we are certainly open to the idea.

Metal Shrine: Your solo album then, what kind of style of music is that gonna be? Is it gonna be a whole lot different from CINDERELLA?

Tom: No, not really, because being the lead singer and the main song writer and I did a lot of the guitar work in CINDERELLA, it’s kind of hard to run from my sound. I had a lot of influence over those records so… I’m just doing what I do and that’s hard rock inspired by blues and roots music. What I did in CINDERELLA is what I love to do and what I’m doing on my own is what I love to do. I try to be true to what I like. It’s similar in that way, you know. Dynamically the records, the CINDERELLA records, and especially as they went on into “Long Cold Winter” and “Heartbreak Station”, they had a lot of different flavors and colors and dynamics and different types of songs, which I always like because the bands that I grew up on, like, [LED] ZEPPELIN and THE [ROLLING] STONES, they really covered a lot of area musically. My solo record does that too and I think it makes for a more interesting record when it’s not just the same song for 14 tracks.

Metal Shrine: Do you do most of the stuff yourself or are you working with other people?

Tom: Well, I have musicians, local musicians here in Nashville for the rhythm tracks and the drums, the bass and the keyboards. I’d say 95 % of the guitars, I did myself, but I do have a couple of local guitar players that played on it. It’s a mixture of people and I’ve even got Bobby Keys, the sax player that did all the STONES stuff, he played on the record. It’s a cool record and I’m proud of it! It’s been a long time coming and I know that probably a lot of people at this point don’t even believe it’s gonna come out. (laughs) I’ve been working on it for five years, but it really is a record and it’s really coming out! (laughs)

Read the entire interview at the Metal Shrine blog.

Photo below by Stephanie Cabral