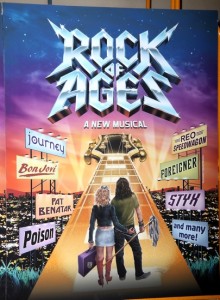 According to The Wrap, Tom Cruise is preparing for role as role in the upcoming film adaptation of the hit Broadway musical “Rock Of Ages” — which showcases popular rock songs from the ’70s and ’80s — by training with Axl Rose’s vocal coach.

The actor will star as Stacee Jaxx, an aging musician whose glory days are long past. Among the tunes Cruise will perform are BON JOVI’s “Wanted Dead or Alive” and STYX’s “Renegade”.

“He’s been studying with — seriously — Axl Rose’s voice teacher like five hours a day,” director Adam Shankman tells The Wrap. “The prognosis is more than excellent.”

The movie is a love story told through the music of PAT BENATAR, BON JOVI, JOURNEY, POISON, TWISTED SISTER and other artists from the 1980s.