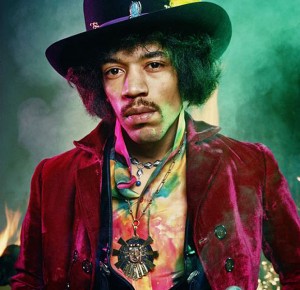 Already I can see the shouts of “no, no — Jimi wasn’t a Heavy Metal guitarist”. Oh yeah, just say that sentence again and listen to yourself. Jimi Hendrix played loud and distorted and the music of the JIMI HENDRIX EXPERIENCE was something never heard before. Without Jimi Hendrix I would have been lost. I know I speak for many guitar players. He was a person, like Ronnie James Dio was to singing, that had talent that was unapproachable by most of us mere mortals. (Don’t worry, though Jimi Hendrix is deceased for certain, his notes are still forever feeding back. For a man that died in 1970 as a young great, his music still rings loud and clear. Many posthumous releases — many that are real good — have been released in the ensuing years since the Guitar God’s untimely exit from his mortal coil. I ruined teeth trying to emulate his flashiness by replacing the plectrum to pick and strum with my mouth. (Stevie Ray Vaughn is the Heavy Blues equivalent of Jimi Hendrix, to some degree, btw.) You see, Jimi had no equals. His talent is far and away the true gift of innate greatness. “The Star Spangled Banner”, “Foxey Lady” and “Highway Chile” were heavy as 10-ton anvils, imbued with a grooviness that is so so difficult to match. Jimi Hendrix was fully engaged while playing. Every note came straight from the very core of his being. And if you think “it was the drugs”, then you are thinking mean-spirited; listen and learn. Jimi Hendrix was the antithesis of the Classical Music guitarist. Classical Music is ace to play, but doesn’t in- clude feeling and expressing emotion. Notating Jimi’s solos and chords simply reveal something otherworldly. His note choices were exquisite and above all Jimi was original.

Originality is one of the requisite keys in all of Rock and Roll music, whether it is Heavy Metal or not. This is the greatest gift that Jimi Hendrix gave. “Be original”. Be yourself and “fly the freak flag high” were running commentaries to the legendary Hendrix’s music. For the short amount of time he was on Earth, he left an indelible impression upon listeners, and especially guitar players. I have had students take lessons from me, and if they never heard of Jimi Hendrix I make it my business that they go home and watch him on YouTube and get a hold of one of his records. At least one. In the great unwritten book of Guitar, this is mandatory. And for those who couldn’t be among the hippies and lucky ones to see him at Monterey, arguably too young, the legend lives on — in 2014 — @ http://www.experiencehendrixtour.com

Album: “Are You Experienced?” 1967 LP – The JIMI HENDRIX EXPERIENCE. This is the debut album that by September of 1967 had impacted with surgical precision into the youth mindset. After just 3 studio albums though, Jimi Hendrix misjudged the drugs he was taking and slipped away from us all. He was born to play Woodstock and on “Woodstock: Music from the Original Soundtrack and More”, released in the spring of 1970, he is captured in all his glory. It should be noted that his recording history begins in 1965, as a sideman. Jimi knew how to “vamp”. This is a very important word in guitar circles. It means that if someone throws a guitar strap over your shoulder and you look down at the guitar you are playing and effects boxes below, and the amplifiers, you will know instinctively what to play.