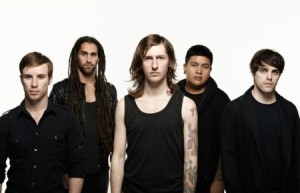 “Patterns”, the new video from California metallers THE HUMAN ABSTRACT, can be viewed on the band’s Facebook page (click “Patterns” on the left menu). “This was the first of two we shot in one day with director Scott Hansen,” says frontman Travis Richter. “We were lucky enough to land an amazing location for the shoot at the historic Pacific Electric building located in downtown Los Angeles. It felt like the song and the setting made a perfect match for a classic performance music video.”

“Patterns” comes off THE HUMAN ABSTRACT’s third full-length album, “Digital Veil”, which sold around 3,200 copies in the United States in its first week of release to debut at position No. 177 on The Billboard 200 chart. The CD landed at position No. 5 on the Top New Artist Albums (Heatseekers) chart, which lists the best-selling albums by new and developing artists, defined as those who have never appeared in the Top 100 of The Billboard 200.