THE DAMNED THINGS Teams Up With INKED Magazine For Headlining Tour 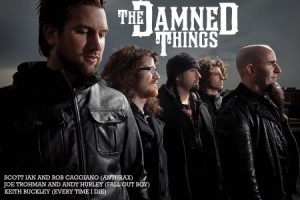 “We couldn’t think of a better partner to start a branded tour with then Inked magazine,” Kapp said. “‘The Inked Music Tour’ is combining two great forms of expression, music and tattooing, and I hope music and tattoo lovers are as excited to see THE DAMNED THINGS as I am.”

“We are pumped that the two great, hip and edgy brands of Inked and House of Blues Entertainment were able to bring our devotees under the same roof-especially because it’s the roof of the House of Blues,” said Rakovic.

“Ironiclast”, the debut album from THE DAMNED THINGS, sold 6,200 copies in the United States in its first week of release. The CD landed at position No. 1 on the Top New Artist Albums (Heatseekers) chart, which lists the best-selling albums by new and developing artists, defined as those who have never appeared in the Top 100 of The Billboard 200.

“Ironiclast” was released in North America on December 14, 2010 (one day earlier internationally) via Island/Def Jam.

Rakovic added, “THE DAMNED THINGS embody Inked magazine in two perfect ways. One, they have great tattoos on their bodies and, secondly, like the diverse characters we cover in our publication who illustrate the inked culture, the members of THE DAMNED THINGS are from different backgrounds but have come together to make sick music.”

“This marks the first time that Inked and House of Blues have come together and we couldn’t be more psyched about the partnership. House of Blues is the rock star in the live entertainment industry. We are happy to play Keith Richards to their Mick Jagger,” he concluded.

“We’ve Got A Situation Here”, the first video from THE DAMNED THINGS, was written and directed by Brendon Small, the co-creator of Adult Swim’s “Metalocalypse”.

THE DAMNED THINGS is: