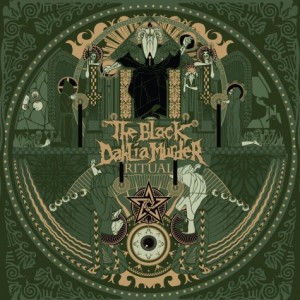 “Ritual”, the new album from Michigan’s unstoppable sons of molten melodic death metal THE BLACK DAHLIA MURDER, can be streamed in its entirety at MSN.com. Due in Europe on June 17 and in North America on June 21 via Metal Blade Records, the effort will also be available as a box set, limited to 2,000 units including special, exclusive digibook, witch board, magic wand, sage, incense sticks and coffin nails. The CD was once again be produced by Mark Lewis (TRIVIUM, BURY YOUR DEAD, DEICIDE), who also worked on 2009’s “Deflorate”.

01. A Shrine To Madness
02. Moonlight Equilibrium
03. On Stirring Seas Of Salted Blood
04. Conspiring With The Damned
05. The Window
06. Carbonized In Cruciform
07. Den Of The Picquerist
08. Malenchanments Of The Necrosphere
09. The Grave Robber’s Work
10. The Raven
11. Great Burning Nullifier
12. Blood In The Ink

Frontman Trevor Strnad considers “Ritual” “the most focused THE BLACK DAHLIA MURDER strike of all time.”

“The whole thread of the songs is more tied together than ever before,” explains Strnad. “Part of it was kind of like, ‘What can we do that’s the most BLACK DAHLIA MURDER thing? What’s going to be the most quintessential BLACK DAHLIA MURDER thing we can do?’ That’s kind of what we set our foothold in. And ‘Ritual’, it just lends itself to that — it’s mysticism and magic and all of that. Everyone has an association with some kind of ritual, so we just thought it was the next logical step.”

Recalling the writing process that led to “Ritual”‘s eventual 12 songs, Strnad says that “every song that got brought forth was exciting and more three-dimensional, more twists and turns, more surprises. There’s more ups and downs and taking people on a journey this time.”

Co-founder Brian Eschbach, meanwhile, credits the presence of fellow guitarist Ryan Knight, who joined the band for “Deflorate”, with helping to move things forward on this particular venture.

“It’s been more collaborative than it’s been in years,” Eschbach notes. “The last two albums (‘Deflorate’ and 2007’s ‘Nocturnal’) I wrote most of the music, and this one it’s almost a 50-50 effort between me and (Knight). He lifted what we were doing on the last album so much from what we’ve done before, his different techniques and stylings that he knows how to wield. It’s really exciting for us to have that be part of the band now.” Strnad adds that Knight “is an educated musician, and he’s brought that kind of aspect into the band, too. We came to him having higher expectations, and he’s exceeded all of those.”

THE BLACK DAHLIA MURDER has crammed quite a bit into its 10 years together — five albums, three EPs and a DVD (2009’s “Majesty”) — and the group members themselves seem a bit surprised by what they’ve wrought. “Yeah, initially we thought we were going to get together on Sundays and try to put a song together every week,” Eschbach recalls. “We never dreamed of being able to live off the band.” But Strnad says it didn’t take long to sense that they could.

“We had the vision that we wanted to take the band to more people, that we wanted to have something bigger than just playing at the crappy ass local bar,” he explains. “Being a metal band, I think, is being an underdog. To play music you know is not digestible on purpose, to preach to a certain kind of depraved person…It’s a lofty goal to have anyone want to hear what we have to say. We’ve been really, really lucky, but at the same time we’re always looking to the future and trying to do what we do better and better.

“And I would say this time, with ‘Ritual’, we really nailed it even harder than we have before.”