TESTAMENT To Enter Studio This Summer 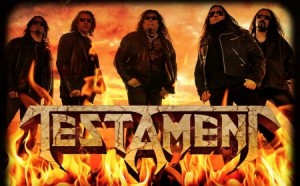 British producer Andy Sneap (MEGADETH, ARCH ENEMY, NEVERMORE, EXODUS) has revealed to Radio Metalthat he will enter the studio this summer with San Francisco Bay Area metal veterans TESTAMENT to begin work on the follow-up to 2008’s “The Formation Of Damnation”. A late 2011/early 2012 release is expected.

“The new album will most likely be a culmination of ‘The Gathering’ [1999] and ‘The Formation of Damnation’, but we’re definitely not going to forget who we are or our roots. I think we’ve found a comfortable spot in our writing style,” TESTAMENT vocalist Chuck Billy stated in a 2010 interview.

“The Formation Of Damnation” was reissued on February 23, 2010 in a deluxe tour edition. The two-disc edition includes the band’s comeback album plus bonus footage of classic tracks and more.

The “Live At The Fillmore” re-release includes expanded artwork and new layout by Carson Slovak and new liner notes by Robert Deutsch.