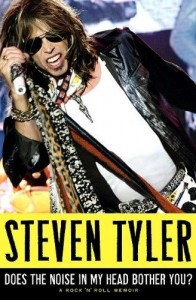 AEROSMITH frontman and “American Idol” judge Steven Tyler will be interviewed by Matt Lauer for the May 1 edition of “Dateline NBC”. Topics will reportedly include Tyler’s family, AEROSMITH, his judge’s role on “American Idol” and his overcoming drug addiction.

Tyler’s new autobiography, “Does The Noise In My Head Bother You?”, is scheduled for release on May 3 as a 400-page hardcover.

“Does the Noise in My Head Bother You?” is the rock memoir to end all rock memoirs — the straight-up, no-holds-barred life of Grammy Award-winning, Rock And Roll Hall Of Fame incductee, and all-around superstar legend Steven Tyler, lead singer of AEROSMITH (and celebrity judge on “American Idol”). This is it — “the unbridled truth, the in-your-face, up-close and prodigious tale of Steven Tyler straight from the horse’s lips” — as Tyler tells all, from the early years through the glory days, “All the unexpurgated, brain-jangling tales of debauchery, sex and drugs and transcendence you will ever want to hear.”

Commented Tyler: “I’ve been mythicized, Mick-icized, eulogized and fooligized, I’ve been Cole-Portered and farmer’s-daughtered, I’ve been Led Zepped and 12-stepped. I’m a rhyming fool and so cool that me, Fritz the Cat, and Mohair Sam are the baddest cats that am. I have so many outrageous stories, too many, and I’m gonna tell ’em all. All the unexpurgated, brain-jangling tales of debauchery, sex and drugs, transcendous and chemical dependence you will ever want to hear.”

The son of a classical pianist straight out of the Bronx of old Archie comics, Steven Tyler was born to be a rock star. Weaned on Cole Porter, Nat King Cole, Mick — and his beloved Janis Joplin — Tyler began tearing up the streets and the stage as a teenager before finally meeting his “mutant twin” and legendary partner Joe Perry. In this addictively readable memoir, told in the playful, poetic voice that is uniquely his own, Tyler unabashedly recounts the meteoric rise, fall, and rise of AEROSMITH over the last three decades and riffs on the music that gives it all meaning.

Tyler tells what it’s like to be a living legend and the frontman of one of the world’s most revered and infamous bands-the debauchery, the money, the notoriety, the fights, the motels and hotels, the elevators, limos, buses and jets, the rehab. He reveals the spiritual side that “gets lost behind the stereotype of the Sex Guy, the Drug Guy, the Demon of Screamin’, the Terror of the Tropicana.” And he talks about his epic romantic life and his relationship with his four children. As dazzling, bold, and out-on-the-edge as the man himself, “Does the Noise in My Head Bother You?” is an all-access backstage pass into this extraordinary showman’s life.

A short video clip of < Steven Tyler talking about “Does The Noise In My Head Bother You?” can be viewed below.

Says Tyler: “God, a memoir… A memoir like this is beyond cathartic. it’s one step better than having an album with your songs on it from the ’70s and it being 2010. So when you put on the headphones and you listen to the beginning of [the AEROSMITH classic] ‘Sweet Emotion’, you have all of this incredible room sound that you were in then and can totally relate to. It’s so strong that you can almost smell it when you’re in the headphones listening to the beginning of ‘Sweet Emotion’, for someone like me who wrote it, sang it, was in the studio and knows what went on. Just listening to it brings me totally back… However, conversely, doing a book, you bring up things that you didn’t remember happened, and as soon as you do, it opens up that place in your mind that you spew out onto the pages. It’s like watching your own yearbook, your own personal yearbook, and I hope that’s what this is.”

“Does The Noise In My Head Bother You?” traces Tyler’s youth in the Bronx, his early music career and influences, his legendary partnership with Joe Perry, the meteoric rise, fall, and rise of AEROSMITH over the last three decades, their music, his epic romantic life, his relationship with his four children (including actress Liv Tyler and actress and author Mia Tyler) life on the road and in the spotlight, the economics of the rock star business — and all the sex, drugs, and rock and roll a reader could ask for.

Tyler spent the last few years working on his book, which he says will be more personal than the material covered in the band 2003 autobiography, “Walk This Way: The Autobiography of Aerosmith”.

Commented Tyler: “This is not just my take — this is the unbridled truth, the in-your-face, up-close and prodigious tale of Steven Tyler straight from the horse’s lips.”