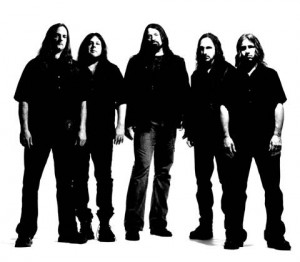 Peter Ruttan of MetalTitans.com conducted an interview with vocalist Russell Allen and guitarist Michael Romeo of North America’s progressive metal masterminds SYMPHONY X before the band’s May 7, 2011 concert at in Portland, Oregon. You can now watch the chat below.

In other news, SYMPHONY X will take part in a live online chat with fans today (Tuesday, May 10) at 3 p.m. PST / 6 p.m. EST from the House of Blues on the Sunset Strip in Hollywood, California. The chat will take place in the Nuclear Blast Streaming Room. 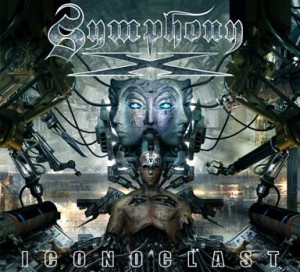 “The End Of Innocence” and “Dehumanized”, two brand new songs from SYMPHONY X, can be streamed on the band’s Facebook page. The tracks come off the group’s ninth studio album, “Iconoclast”, which will be released in Europe on June 17 and in North America on June 21 via Nuclear Blast Records.

Illustrator and film concept artist Warren Flanagan (“Watchmen”, “The Incredible Hulk”, “2012”) is the talent behind the album artwork. He states, “The idea was to create imagery that was a little darker in tone to previous SYMPHONY X albums and to represent the overall theme of ‘Iconoclast’ into the artwork. The whole concept came from [SYMPHONY X guitarist] Mike [Romeo], who had a strong idea of what the cover should represent based off the music. I just ran with it. When the album’s title was decided on, I focused the image based on the meaning of it. I also wanted to use the band’s signature ‘masks’ but present them in a way that connected to the new album.” 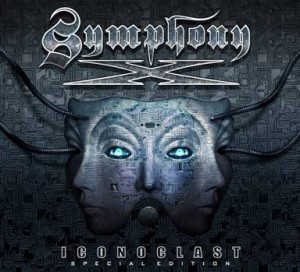 SYMPHONY X founder and lead guitarist Michael Romeo has the following to say about Flanagan’s art: “We worked with Warren on the last CD, ‘Paradise Lost’, and have a good relationship with him. When I talk to Warren about artwork ideas, a lot of times we end up making comparisons to films and movies. With the new CD, ‘Iconoclast’, the music and lyrics have a darker mechanical/technological theme, and I remember us talking about scenes from films like ‘The Matrix’ and ‘Terminator’. From there, we sent him some songtitles and lyrics (songs like ‘Dehumanized’, ‘Bastards Of The Machine’, ‘Electric Messiah’) and just let Warren run with the ball. He has a great imagination and style, and he totally gets what we are trying to convey with the music.”

The track listing for the jewel-cased version of “Iconoclast” is:

The track listing for the 2-CD special edition digipak version of “Iconoclast” is:

SYMPHONY X kicked off a North American headlining tour this past Thursday night (April 21) in Philadelphia with support from Boston’s POWERGLOVE and Montreal’s BLACKGUARD.