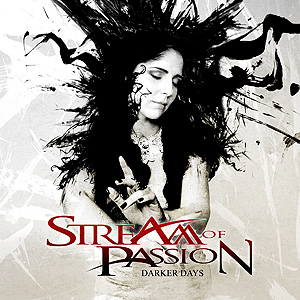 Dutch/Mexican gothic/progressive metal band STREAM OF PASSION has set “Darker Days” as the title of its third album, due via Napalm Records on the following dates:

The CD was recorded at Sandlane Recording Facilities in Rijen, Holland.

Check out the cover artwork below.

STREAM OF PASSION has spent the last few months working on material for the new CD. But to make the wait a little bit easier and as a big “thank you” to all its fans for their unconditional support, the band released a new track online entirely for free! The song, titled “Spark” can be heard below.

STREAM OF PASSION’s sophomore album, “The Flame Within”, entered the official chart in Holland at position No. 57.

The band’s debut CD, “Embrace the Storm”, was released in Holland in October 2005 via Sony/BMG Benelux. The effort was issued in the rest of Europe and the U.S./Canada via InsideOut Music.

« RUDY SARZO On Coping With RANDY RHOADS’ Tragic Death: We All Deal With Grief In Different Ways The Return Of LEATHER LEONE »