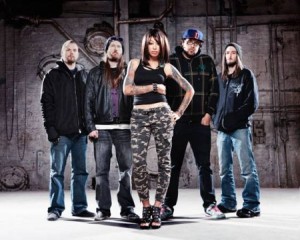 Behind-the-scenes footage from the video shoot for “One Reason”, the new single from the Knoxville, Tennessee-based female-fronted metal/hardcore act STRAIGHT LINE STITCH, can be viewed below. The clip was filmed and directed by Dale “Rage” Resteghini, who has helmed over 550 music videos since 2003, including clips for such metal bands as MUDVAYNE, HATEBREED, ANTHRAX and SHADOWS FALL. Rage has also helmed videos for some of the biggest names in the hip hop world, including Lil Wayne, Diddy, Snoop Dog and Ice Cube.

“One Reason” comes off STRAIGHT LINE STITCH’s sophomore album, “The Fight Of Our Lives”, which sold around 2,700 copies in the United States in its first week of release. The CD landed at position No. 5 on the Top New Artist Albums (Heatseekers) chart, which lists the best-selling albums by new and developing artists, defined as those who have never appeared in the Top 100 of The Billboard 200.

The follow-up to 2008’s “When Skies Wash Ashore”, “The Fight Of Our Lives” was produced and mixed by the Grammy Award-nominated producer Johnny K (DISTURBED, MACHINE HEAD, SEVENDUST) and includes eleven new songs. Additional work on the album was done by Ben Schigel.

STRAIGHT LINE STITCH will take part in this summer’s Rockstar Energy Drink Mayhem Festival alongside MEGADETH, DISTURBED and GODSMACK. The band will appear on the “Extreme Stage” on all dates along with SUICIDE SILENCE and ALL SHALL PERISH.