So what do we have here?:

Sepultura are Gods who have made their official appearance in Death Scream. 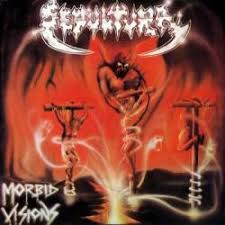 Sepultura are the mighty Brazilian Gods who combine talent with thrash and end up with death metal that makes Dark Angel look like Velveeta. A strict beat is always employed which is refreshing. Rudimentary as it may seem, the drums must not miss a beat. Sepultura know what it takes in this, the simplest of respects.

Well this ultimate combination of Slayer & Black Sabbath that is exemplified by this band’s “Bestial Devastation”(1985) EP- is still a what is happening, musically- 50% Sabs and 50%Slayer.

Their name means ‘grave’ and Sepultura gets as close to being in one as anyone living would want to.

‘Stars’ go to all their songs; right from the mere intro tape through “Morbid Visions”- (1st song), “Mayhem”, “Troops Of Doom”, and “War”. The first side alone caps up what some death metal groups may take ten albums to achieve: Greatness. This is classic stuff that will through time, no doubt, become even more classic.

This album isn’t available on import yet. Yet Sepultura can easily compete, if given half the chance, with the new discs by Celtic Frost, Messiah(Czech) whose 1985 LP- “Hymn To Abramelin” is finally here in 1986 getting distributed. Sepultura can compete with Death and any other Death Metal band you care to name. Sepultura are that good!

Salvage through the rubble of this rancid planet and find their address because it might take a while for the Seps to rise out of far-off Brazil.