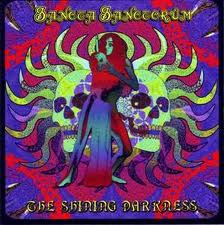 The multifaceted creature we shall call the doomysaurus rears it’s tooth-filled head again in the form of Sancta Sanctorum who rip into the sorry carcass of Earth’s soft white underbelly with depressing odes of woe.

Do you like Classic Rock radio stations to listen to while you drive or do housework?

Sancta Sanctorum come at you with a very impressive album cover depicting two skulls and a swirl of pinks and purples.

Once you have glanced at the cover you have most likely overlooked the girl in the middle holding the skull with a candle lit on it’s head. Excellent artwork make my digipak a great keepsake.

What about the music?

The Saint Vitus influence hangs like a doomy fog on ‘Nothing Left At All‘.

There are melodic hard rocking touches within this song that harken back to Aerosmith circa- 1975-1978.

When I speak of Saint Vitus being an influence I am talking about that doom grandpa’s heady ‘Hallow’s Victim‘ and self-titled debut Lp both from the Mid 1980s.

Track six, ‘When Hopes Are All Gone‘ is a clumsy title; wouldn’t ‘When all hopes are gone’ been more appropo?

My experience is that you can’t micro manage music and slight criticisms could mire the overall view of what the album in question is all about. So I’ll back off on this point as these guys are from Italy.

Sancta Sanctorum are all about Doom Metal.

So ‘When Hopes Are All Gone‘ comes gliding in with bombastic flourishes in a manner set forth by Black Sabbath at the dawn of the 1970s with ‘War Pigs‘.

No sunlight gets into the music and ‘When Hopes Are All Gone‘ benefits greatly from the absence of light. An agonizing compostion that plays a bit uneasy; Sancta Sanctorum‘s strength lies in the ability to change up speeds as well differing the approach on each track and slightly differing styles, also.

I have to caution buyers though as Sancta Sanctorum are a stone faced bunch.

If you want fun and frolics then you need Crade Of Filth as the negativity on ‘The Shining Darkness‘ looms large.

You may know that Doom can overwhelm the music of a band unless like The Obsessed or Trouble, energy and vervacity are injected into the mix.

No more evident is this than on ‘No Expectations‘, Track number nine of ten on ‘The Shining Darkness‘.

Another Italian stalwart act that comes to mind is Bulldozer, who during the course of four studio albums in the 1980s combined Doom and traditional Heavy Metal and delivered it up in a bleak and cool, heavy manner.

I hadn’t thought about Bulldozer in a long time nor have I listened to their music. I wouldn’t be too surprised if they have influenced Sancta Sanctorum. I will have to look into this.

‘No Expectations‘ is a song I really can dig on as it contains the groove of ‘After Forever‘/Early 1970s Black Sabbath number from B.S.’s ‘Volume Four’ album.

Throughout this album the guitar tone and the old-fashioned drum set sound help contribute to the mental throwback to Rock’s best moments that congeal into Sancta Sanctorum‘s trademark psychedelic sound.

You can tell that this band lives, craps and eats Heavy Metal powered Doom.

Like the hippies that carried signs during the Vietnam War warning us that mankind had reached it’s pinnacle; it’s peaceful apex and was heading down the path of no return, by carrying signs reading ‘The End Is Near’: ‘The End Is Near’ lurches forth as the lead-off track but I have saved talking about it till now when I have illustrated Sancta Sanctorum‘s grim mission.

Sancta Sanctorum are all over this morose declaration of the end of the world.

‘Bread Of Tears‘ and ‘Soul Of Truth‘ are the deepest cuts and the lyrical fodder is food for the soul.

I urge all of you out there who are doom inclined to buy this CD and spend some time reading the sobering words that accompany the music on the CDs.

Black Widow Records gives a beautiful digi-pack and 12-page insert booklet to help with the analysis of this brave quintet.

Frederick Dope on guitars has that Tony Iommi (Black Sabbath) kind of charm and prompts me to say: ‘Who needs drugs when we got Frederick Dope‘. And as the Heavy Metal hippies of Sancta Sanctorum might like hearing: ‘God Is Dope’.