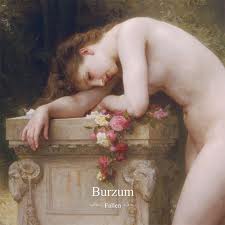 Black Metal is a misanthropic yet romantic endeavor.

Music about darkness that searches for melody and congruency more than it’s beefed up brother Death Metal does, though there are exceptions as every great band rises above it’s genre constructs.

Burzum is such a band.

The new 2011 studio album is simply titled ‘Fallen‘. This is why I have always liked Burzum: It is not a complicated thing.

‘Fallen‘ is a deep, deep look into all things nocturnal seen through the eyes of a man who has, by choice, chosen to go to hellish extremes with his own passions; a convicted murderer is Varg Vikernes, the man behind the one man band called Burzum.

2011 turns out to be a great year for grimness as man’s technology is literally frightening these days. Even a brave Norse warrior of old could forgiven for being just a tad timid amidst the harsh light of modern mankind’s fluoresency.

And Varg Vikernes is an old warrior who seems to be just the kind of man that existed long ago. Burzum is the great construct of his mind and a very viable option for the Black Metal consumer.

Burzum‘s newie, ‘Fallen‘, leads off with a sinister intro atypical of the genre greats’ great studio album beginnings. Dark Throne, Bathory, ‘The True’Mayhem and Satyricon are Burzum‘s only real competition on this whole planet.

‘Jeg Faller‘- thunder breaks peace as this track breaks stride like a stallion and Varg Vikernes belches forth the lyrics.

The chorus is a shimmering surprise with a hooky chorus.

‘Valen‘- is the Norse word for fallen and shows Burzum to be playing in the style of the Heavy Metal forefathers of the 1980s.

This is where the appeal of Varg’s music truly lies. Burzum is a beast at it’s best when not getting too weird.

‘Valen‘ is a song that proves where Varg Vikernes gets most of his inspiration from. It is also where the Black Metal genres founders got their inspiration; and never forget that Burzum is one of them. Burzum started with the spooky ‘Burzum’/’Aske’ studio discs at the dawn of the 1990s and now Burzum reign seemingly forever.

‘Vanvidd‘ and ‘Budstikken‘ are stubborn stabs of dyed/died in the wool True Black Metal. This is a term that shouldn’t be thrown around loosely. You must be a little eccentric and very heavy on presence and understand it’s meaning in your very soul.

Some may consider Varg Vikernes of Burzum to be an asshole but those are the same people that don’t let the music dictate the terms. Always let the music be the measure; is my motto.

I am hearing the complexities of this world vortexed into a simple cohesive whole when I listen to Burzum. A deep listen is the album ‘Fallen‘, indeed.

The music of Burzum has come a long way since ‘Filosofem‘ and being out of prison ‘the Count’Varg can plunder the musical world now with ease.

« Before The Dawn – Deathstar Rising Sancta Sanctorum – The Shining Darkness »