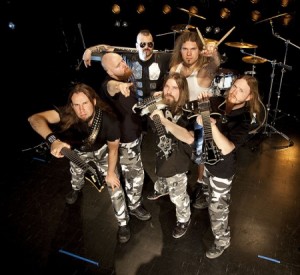 Commented bassist Pär Sundström: “Over the years so many people have told us we should make a live album and finally we fell to the demands of all of you, our fans.

“‘The World War Tour’ was amazing and we wanted to record it and keep the shows alive forever. So, during the magic night aboard the SABATON Cruise 2010 we recorded the whole show and now we stand ready to release it as the first-ever official SABATON live CD. And as if it was not enough, we also recorded many shows all around Europe and put together a whole CD with mixed songs from various cities. And finally we decided to release the recording we did at the first Rockstad:Falun festival 2008 from Falun as a bonus for you who buy the limited edition. In total it will be over 20 different songs and we have also collected a lot of pictures from the tour and put them in a massive booklet. We will reveal all details very soon.”

“Screaming Eagles”, the new video from SABATON, can be viewed below. The track comes off the band’s fifth album, “Coat Of Arms”, which landed at position No. 124 on the Top New Artist Albums (Heatseekers) chart, featuring the best-selling albums by new and developing artists, defined as those who have never appeared in the Top 100 of The Billboard 200.

“Coat Of Arms” was released in Europe on May 21, 2010 via Nuclear Blast Records.