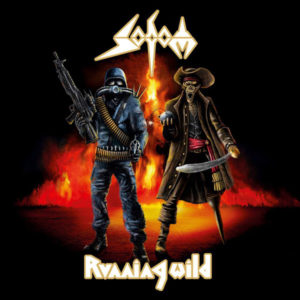 Released for September 2016 by RockHard magazine, this split 7-inch EP is sure to be a riot with Teutonic Thrash fans long-in-the-tooth. Honestly, if fans are like I am, they thrill when the mighty juggernaut that is Germany’s Sodom release anything!

“Fearlessly we stand!”: Tom Angelripper tears out some of the best words to a Sodom song since the “Code Red” Sodom album many a moon ago. Add to that a Thrash pounding akin to what is heard in perennial favorite, “Blasphemer”, and what a treat this is for true fans.

Running Wild do a song on the flipside from their “Rapid Foray” 2016 album. It is pure pirate fun like we have long come to love from these resilient Thrashmen.

It is obviously a match made in the shade — Sodom and Running Wild — and the songs have been carefully placed on this little record gem to reflect the collective might of both outfits. I will go as far to also say that “Warmongers” could’ve have been an outside from Running Wild’s “Under Jolly Roger” album.

But, what it comes down to, as you can see by the record cover, the real prize in adding this to the collection is the album cover. Knarrenheinz is Sodom’s mascot and he is standing alongside Running Wild’s primo pirate mascot Captain Adrian.