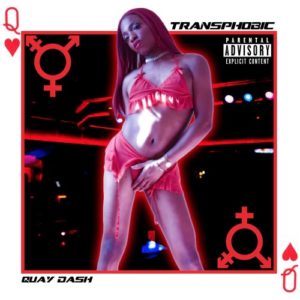 Satanic Transgender Ghetto Rap, anybody? From the dank project-littered streets — where the cockroaches are often bigger than the gangsta homies —  of Bronx County, New York City, comes Quay Dash.

The self-proclaimed M-I-C holding “Queen of NY”, Quay has thrust herself and her very direct brand of Rap into the spotlight on the strength of her best feature: Nastiness. Here’s a brief snip of what you can expect when you venture forth to find her latest work, “Transphobic”:

“Got this nigga hard like a #2 pencil”, Quay opines in one of her rants. This future-fated Village Voice newspaper centerpiece (no doubt) is climbing the popularity ladder with her “Transphobic” EP. She is a lone, bold voice loudly speaking out on the perils of transgender life as she prances across the stage. One listen to Quay baying “This is for my ghetto bitches” in a sick mantra is enough to realize what a force and a what a big splash this artist is making in the entertainment industry. She will soon embark on a tour with the legendary person known famously as Peaches.

So Chillax with “Transphobic” and stay tuned for more, more, more!