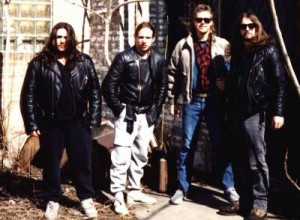 ABOMINATION, the 1990s band formed by MASTER mainman Paul Speckmann, will reform for a 17-date European tour in November 2011.

When asked about ABOMINATION’s split and the possibility of a reunion, Speckmann stated in a 2009 interview, “Management played a big part in the fall of ABOMINATION and [the band’s record label] Nuclear Blast made many mistakes as well. As for a reunion, this will never happen as guitarist Dean Chioles died of multiple sclerosis many years ago and this was a sad loss for all.”

Regarding what significance ABOMINATION has had for him personally and musically, Speckmann said, “ABOMINATION was a group that experimented with many genres of music and wasn’t afraid to try new ideas out and this was a chance to try out many of my crazy changes and the band would successfully implement them in their songs. I had the pleasure of bringing my ABOMINATION vision to Europe one time only for 26 performances and I will never forget this.”