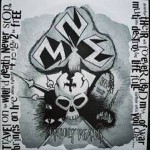 Seriously. Just listening to all the squealing feedback everywhere on this record and you can tell this is not a sane man. Too bad for him (and his mother) because this album succeeds in sounding like a subway
train coming to a screeching halt, continuously, for half an hour.

Imagine something recorded in the pits of hell, that out-schizos Venom
100 times. If I had to put a label on the er, music of NME, I’d
say they play (played?) industrial super thrash death metal mayhem.
How’s that for labels? An apt description, I feel, nonetheless.

There are some good tracks a.k.a. songs (!) lurking in this brutal noise.
Namely, the more controlled trio of opening songs “Louder Than
Hell”, “Black Knight”, and “Evil Dead”. The shouts of Evil Dead –
Dead Evil is devilishly catchy. As for the rest it is one glorious
mess and it is real good at twisting brain matter.

Unholy Death will give Granny more of a migraine than even VoiVod!