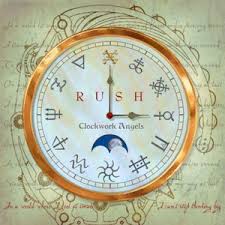 Rush are on their Time Machine tour and the subject with Rush has become “time” itself.  Go back to 1987’s “Time Stand Still” from the “Hold Your Fire” album and “Time & Motion”(one of RUSH’s weakest tracks, musically) from 1989’s “Test For Echo” –  actually reading the lyrics will give you “insight” on how mastermind drummer/lyricist Neil Peart really works.

And do not start analyzing all-things-Rush unless you are as diehard a fanatic as I am about them. As I understand it , the upcoming album, “Clockwork Angels”, will be the prequel to 1976’s “2112” opus. I assume this has something to do with the fact that we are nearing the end of the Mayan calendar and 2012 looms on the horizon. Again, I should stress, that I am a total Rush fanatic and I look for ‘signs’ in their music and lyrics constantly.

Rush’s Neil Peart is a constant searcher and through his lyrics he strives to find the truth about life, humanity, etc. Since 2007’s “Snakes & Arrows”LP, Mr. Peart has been writing about religion, God, etc, in his own fantastic way. Mr. Alex Lifeson is a Christian –  he of course is Rush’s guitarist. Geddy Lee (real name Gary Weinrib) is a Jew and has the job of giving voice to Neil Peart’s lyrics.

I have always considered Rush to have a very clean attitude towards life in general and they now stand as the number three rock band of all time with The Beatles and The Rolling Stones at number 1 and 2 , respectively. These three guys have been together since 1975’s “Fly By Night” LP.  Their longevity and positivity and amazing sense of humor are what endears many to love them. And I love Rush which means I trust, respect, honor, glorify, and am quite devoted to not only their music, but also their private lives.

I see them as perfectionists who came out of the progressive rock/metal scene to vaunt themselves way beyond what anyone could have expected; the first album from 1974 with John Rutsey on drums was a Zeppelin-like metal album with the uncontrolled ear-piercing vox of Geddy Lee making you either a love ’em or hate ’em listener. There is no recognizable musical or lyrical link to those first few albums.

On “2112” Rush practically invented the progressive metal sub-genre now practiced by the likes of Dream Theater, Fates Warning, Spock’s Beard, Opeth.  The closest comparison to them, overall, are obscure ones: Cirith Ungol & Voivod.  Rush has gone through many phases of technicality and complicatedness to arrive at their current hard rock style.

The accent in “Caravan” lyrically is on the great lumbering beast that is Rush and crew , as the lyrics say -“Going where I want not where I should”.  Rush are in completely original territory here as they were on their last album’s lead-off track- “Far Cry” and that place has a name: Left field.  That is baseball talk for the left side of the outfield;  a big distance from home plate. I use this baseball analogy just so you know that ‘playing it safe’ are three words that these three wise men never, ever, heed.

“Caravan” is a noisy blaring hard rock number with stop-and-go playing.  I mentioned 1989’s “Test For Echo” LP , earlier, and it is closest to a comparison in the Rush LP category that I can find. Though, I must stress that Rush always seem to put out the strangest song(s) first! Rush know that they have a diehard fanbase that will eat up anything they may release. I, personally, find “Caravan/BU2B” to be ‘signs of life’ from a band that like, God, never stop creating!  No, God is not a band- I speak of the creator of the universe. “In a world where I feel so small/ I can’t stop thinking big”- Neil Peart’s megalomaniacal lyrical bent reaching an all-time high of self-exultation. Mr. Peart is a manic-depressant so his highs are very high and his lows very low. His degree of cynicism is also at an all-time high in “BU2B” as he is saying that what he was ‘Brought Up To Believe’ just ain’t true! “BU2B” sounds way too similar to “Caravan” musically and that is a bit puzzling but is the better of the two songs. “God loves us all to death” is Mr. Peart’s finest lyric, I feel, ever, and it is the last line in “BU2B”. It is a perfect ending, though  to a difficult-to-listen-to single.

The album “Clockwork Angels” should be real interesting to check out in it’s entirety.  I believe that there will be a ‘side-long’ track ( a very long song with many parts, inotherwords), but that is all rumor mill stuff at the moment. Rush are a complicated band in a complicated world.