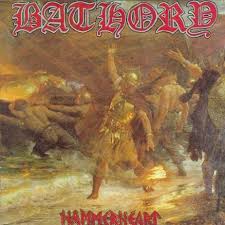 Not even Voivod have progressed as much over 6 albums as Bathory has in five. Starting in 1982 with a cut on the compilation “Swedish Metal Attack”, with the song “The Return Of Darkness & Evil”- which appeared in a different version on “The Return” LP from 1985, as a full-fledged Satanic black/death band, Bathory have miraculously been transformed into a somewhat sophisticated “Majestic Metal” band.

What I mean is, you know how in the Bible how you see stuff like, and God said- “I am the first and the last. I am Alpha & Omega”?  Well that is the grand kind of language contained on this disc: Witness “Father To Son”.

Of course, Bathory is a studio project, not ever touring and not as I know ever planning to and interviews are extremely rare so I can only draw from what I hear in the music.

Quorthon Bathory and his mysterious cohorts have musically crafted a near 50-minute tour-de-force with layers and layers of choral harmonies & everything-and-anything else that the guys could cram in.

The concept of “Hammerhear” is actually ‘Part 2’ of the Netherlandic Viking tales first spun on 1988’s “Blood Fire Death” LP.  The difference of two years has seen Bathory dispensing , finally, with the ultra-speed songs which never really worked that well anyway. Gone also is the ‘death’ themes which Quorthon must have finally gotten out of his system:  The last album had “A Fine Day To Die”, “Pace Till Death”, “For All Those Who Died”, and the title track, “Blood Fire Death”.

So for anyone who has scoffed at the mention of Bathory should try this album on for size. You can’t tell me after listening to “Song To Hall Up High” tht Mr. Q can’t sing. Quorthon almost sounds like Greg Lake of Emerson, Lake & Palmer fame and that man’s voice is beautiful and quite perfect! “Shores In Flames” & “One Rode To Asa Bay”, both over 10 minutes each, are simply epics of mammoth proportions. If you are one of the unfortunate people who don’t have this opus, insisting that Bathory & Venom could be one and the same, you owe it to yourself to become enlightened! The Steely Dan of Death Metal can’t be overlooked for much longer. Bathory is now a stunning act! This Quorthon is the same man who posed in promotional glossies in a pentagram, breathing fire, decked out in black leather. Instead, 1991 sees the mysterious Mr. Q. with a receding hairline and plain ‘ol blue jeans.