Nuclear Death – Welcome To The Minds Of The Morbid – demo #2 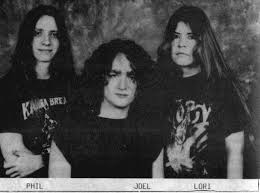 Nuclear Death were featured in the last issue of Death Scream, #3, with their “Wake Me When I’m Dead” demo and “January ’87 rehearsal”- (an unofficial release).

The highlight of the band was the animal lead-vocals of bassist Lori Bravo.  I pointed out that she has a 100% metal, growling voice as deep and as deadly as any male singer/growler in death metal.  “Welcome…” was recorded in April 1987.  The Arizona U.S.A. bunch recorded this new demo after a year of being together as opposed to the first demo, “Wake Me…”, which was recorded a bare 3 months into the band’s existence.  Ms. Bravo feels that fans will hear the difference.  I, for one, sure do.

Nuclear Death’s faster-than-light approach to death/thrash metal is much tighter this time around, and the riffing that I thought was negligent is now more clarified.  The riffing is some of the fastest I’ve heard in intense death metal since the ill-fated Repulsion did their “Slaughter Of The Innocent” rough-mix demo/LP tape of last year.

All four songs on “Welcome..” are great.  “Cremation” is the best track of the bunch.  Lori does great growls and some great singing, also.  The melodic part of the last song “The Third Antichrist” is where Lori breaks out her singing pipes.  This song is what I originally wrote down as being called “Nuclear Death”;  so I stand corrected, now!  The instro called “On Behalf Of The Beast” and “Necrobestiality” are two equally great new death tracks.