New Metal Empire from Munster, Indiana, caught my fancy with the band’s logo that spells out NME. 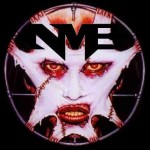 Note: This is not NME that released the album “Unholy Death” back in the Mid-’80’s. That particular NME did also hail from the U.S.A. but the the mainman sicko from that outfit went to prison for butchering his own mother. Though, strikingly, there are similarities between New Metal Empire and that 80’s curio NME.

It is the fact that both of these outfits are capable of grabbing that debut Venom LP, “Welcome To Hell”‘s ghoulish sound.

There are three tracks to be found on Purevolume.com by New Metal Empire and I am not sure if this is taken from an album or not as there is very little information given.

“Two Sons Of Tatooine”- A glorious whacked out macabre tune that is both menacing & meandering.

“When The Damned Scream” features a dirty fuzzy super-heavy guitar by, simply, Kyle that outdoes Venom’s original guitarist Mantas for sounding like six-string playing coming from the bowels of hell. There is an eerie, hellish keyboard charm to the music which the duo’s other half Jeff, also on bass guitar, plays.

“Twilight’s Divide”- is a guitar solo with a swanky, infectious little theme going on.

The band’s logo and artwork is worth a look. It is quite obvious that a darn good artist designed/drew it.

New Metal Empire have a lot of originality and spirit going for them.  There are not that many individuals capable of capturing that early 1980’s Black Metal feel. NME have got it