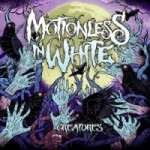 Many of the people who love heavy metal or punk or hardcore or death/black/thrash/speed extreme stuff are unabashedly coming out with their other likes in music.

Whether that be Frank Sinatra or David Cassidy/The Partridge Family or The Runaways; or how about the band Bauhaus that one member of Motionless In White wears a T-shirt of?

There is no shame or sense needed anymore. As music fans we have all reached an important pinnacle:

Motionless In White are the epitome of what the word freedom means these days in music.

And parked on purevolume.com is “Creatures. Let’s examine the tunes more closely.

“We Only Come Out At Night”- For a band that looks like it has Marilyn Manson itself (or is that a young Iggy Pop?!!) as a band member: Take a look at their sextet’s band photo; Motionless In White live up to the shock element that assails you when you look at the icy cold glares etched on the band members’ faces.

It is a look of utter seriousness and downright cool that I see in the photo.

As I listen to “We Only” I am drawn to wanting to see what all the ruckus is about.

The swirling keys and vox that alternate between Satyricon-esque (think the “Shadowthrone” LP) raises the schizoid quotient of this band to ridiculous heights.

I heard Alternative bands doing this kind of thing about ten years ago but now it has come to it’s logical next step as Motionless In White toss off a different Metal/Hardcore/Pop Punk Alternative subgenre every few minutes.

So Motionless are anything but motionless. Though, maybe the vocals could lose a tad of the melodicism. (And does anyone remember Tad? Yep. Google ’em in and throw them into the Motionless In White musical blender)

I kinda like when M.I.W. are slamming along with the heaviness.

“London In Terror”- The more I hear this band the more I am convinced that Screamo/Hardcore/Metal is not what they play. Which leads me to believe that the musicians that make up this artistic bunch have not really gotten a handle on just what to call the style they are doing/developing.

“Abigail” – No it’s not the 1987 King Diamond dittie “Abigail”. Absolutely not.
What “Abigail” is is an original number that has a super-fast bass drum clacking along while pointed, nasty lyrics dominate the tune. The spoken part adds a nice touch to proceedings.

The 1990’s metal/hardcore/extreme music movement has been taken by this band to it’s next illogical extreme. An intentional mishmash might be a good way to put it.

“Creatures”- Motionless In White are at their best when they turn on the Black Metal genre-isms. Though it won’t be enough to be a Metalhead to like this awkwardly cool band.
That poppy punk, alternative thing sticks itself out quite often. Every time the leather and studs cool dude/dudess puts their head down and start headbanging along they will notice something happens in the music that sure the heck ain’t even near being Metal let alone Hard Rock.

Keep listening and keep learning. Let the young ones in Motionless In White teach us how unstuckup they are. “Creatures” is the crowning jewel to do this.

“Creatures” is the direction that this band should continue on in: Hellish and strange; psycho and scary.

And for those who shied away from the whole Emo thing thinking it had nothing to offer; that musical subgenre is present in the music.

Motionless In White will do quite well here in the future of 2011, where we are right now.