Merchandise – End Of The Week 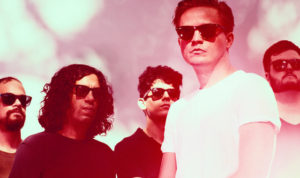 Florida’s twisted sons, Merchandise, have come out with their first album in two years time. “A Corpse Wired for Sound” is it’s monicker,  and has arrived upon the world stage. September 23rd was the release date.

Their new song, entitled “End of the Week” was unleashed as well from it along with an itinerary for the ensuing tour.

James Dean meets Bauhaus taken to it’s modern Rock extreme, “End Of The Week” is a ton of fun to be had and a a great primer to Merchandise’s new offering.

Here is a running snip of the lyrics to “End Of The Week”, proving how interestingly Merchandise write: “Another week Like an empty street Against the world I won’t compete Summer is gone Turned into Fall But home’s the coldest place of all.