Lamb Of God – Hit The Wall 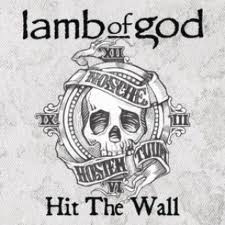 It has been two years since the mighty ‘Wrath, fifth studio LP release by the powerhouse known as Lamb Of God.

In the year of our Lord 2000AD, Lamb Of God on their debut LP, ‘New American Gospel‘, established the direction that the extreme underground would head in and continue on for the next ten years.

Lamb Of God laid down the gospel alright. Their music would be coarse and at times intricate. Everything that seeped into the five senses of human perception would be par for the course as far the L.O.G. was concerned.

It is 2011 and the Lamb Of God are operational once again with a new release. The last few years of the band’s discography has been taken up with the decidedly Metalcore masters of mayhem dishing out ‘boxed sets’ and compilations that document the raging success of this band’s uphill climb to where they finally stand at the top of the hill.

Lamb Of God released the digital single for their track ‘Hit The Wall‘ on February 15, 2011.

The digital single contains but one track; that track of course is ‘Hit The Wall‘and it was originally penned for the 2010 ‘Iron Man 2‘ videogame. It is now being sold on Amazon.com.

Let’s go back and check out what transpired as regards L.O.G. on the 2010 ‘Iron Man 2’ video game. There are no lyrics and the sonic waltz that assails the video game consumer, in the form of the 3 minutes and 17 seconds-long song ‘Hit The Wall‘, is a massive trademark Lamb Of God cacophony of chomping , changing, chunky rifferama that show the band taking command of the videogame playing realm. Spright guitar soloing winds itself like the tentacles of an octupus around the listener. There is good double-bass pedal action going on with the drums assuming maximum velocity throughout as well as what can be likened to a watchmaker in the precision that is on display with the execution of each and every drum hit.

Lastly, in the instrumentation breakdown is the bass guitar that plomps along and is the element of L.O.G. that is what I believe to be what has been sorely overlooked by mostly all the critics.

The bass guitar comes along punching out it’s parts and has seemingly welded itself to the musical framework of ‘Hit The Wall‘ in an infallible manner.

‘Hit The Wall‘ has been used specifically for the game-play aspect of the ‘Iron Man 2’ videogame.

Furthermore regarding the 2010 video game version: It is so insightful to listen to Death Metal instrumentals.

Let me pause and say that I don’t completely buy into defining Lamb Of God as Metalcore as it is the subset of a larger equation; that being Death Metal as a whole, as what the band plays ultimately.

Death Metal has often been defined by it’s lyrical content and in the larger scheme of things by it’s death grunting, growling, croaking, roaring, bellowing and yes, deathscreaming vocal exhortations.

An expungement of said vocals from the mix has not taken place as is usually the case in karaoke. The proverbial cart came before the horse in the case of ‘Hit The Wall‘ as the vocals were absent on the videogame version first time around, in 2010.

‘Hit The Wall‘ in it’s 2011 single format has vocals and it is available for the first time as a digital download by going to www.lamb-of-god.com

The Lamb Of God website informs us that ‘Hit The Wall‘ has also been featured in the April 2011 issue of the print magazine Decibel on that particular issue’s exclusive flexi-disc. Decibel Magazine had that issue available as of March 1st, 2011.

Now that the vocals are on ‘Hit The Wall‘, I can see why the band may have decided/agreed to proceed in the manner of releasing the song again as a digital single as ‘Hit The Wall‘ now sounds like a different number entirely.

I almost hear the reactive question being asked by my readership of ‘Is it better with the vocals?’ And my answer is that personally I don’t think it is a matter of what version is better or worse as much as it is just better to view this digital single release business as experimental and as a curio for collectors and for massive fans of the band.