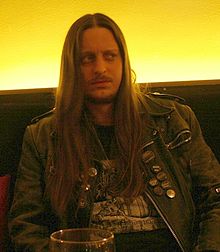 Once upon a time in Norway, there was the ever-(and still is)-ambitious young true Heavy Metal heart of one, Fenriz. He, and his greatest and most consistent partner throughout the years flying a most blackened flag has been the infamous Nocturno Culto, having made Black and Death and Doomy, Thrashy, Crusty, Grinding albums for 30 years with the band/project Dark Throne. Dark Throne have a very enjoyable discography that isn’t a one-sided Norwegian Black Metal story. Darkthrone (notice either spelling is fine and one and the same!), is and as with all originators of a style; as leaders, they are multi-faceted as far as influences. Dark Throne records can bring to mind the music King Diamond makes or riffs heard on an Angel Dust/Death Angel/Bulldozer/Witchfynde or Judas Priest record, or at the drop of the proverbial musical hat the next moment in time will see the crustiest most obscure bands to ever rise from the Death and Doom Metal side of the Extreme Underground music scene ominous tones doth arise. Or they can usurp the hallowed vestiges left vacant since the great Quorthon Bathory vacated of the Q-throne after the Viking icon’s duel saga in 2004 of epic proportions. Yet some will say that Darkthorne/Dark Throne (look at the logo!) is a mere parody or at the very least critical; a hearkening back to the most “Metal” bands that ever crawled the wastelands of the old tape-trading underground. Fenriz is a record-collecting and rabid-listening Underground Metal fanatic. He has said that early Dark Throne were influenced by Poland’s Vader’s first attempts at music. (Vader are a great band, period, and have been churning out original powerful Death Metal records since the inception of their most influential and powerful demos. The first Vader attempts in 1989 on demonstration cassette  tape were astounding and powerful and full of quality and professionalism. And thoroughly enjoyable and engaging. Vader could hold one’s attention enough to look forward to the next disc they would put out. I myself still find Vader’s every new album to be an exciting journey. Yet to the average Metal fan, even, it seems like a deep pick to get supreme inspiration from. Yet that is who Fenriz  is. He is a fellow cut from the kind of tunic of old where he just don’t give a toss.

Isengard, Fenriz’s baby, with himself all by his lonely on all the instruments, though, has always been saved for this incredibly talented, indelible musician’s most obtuse Viking-cum-Forest Metal flights hiding in wait in his imagination. Isengard had its beginnings — in the same year of Dark Throne circa-“Thulcandra”, their first demo — in 1989.

“Spectres Over Gorgoroth”, the first Isengard demo featured Molten Metal barbarity of nothing-less-than-pure-and-great Death Metal. Yet neither Dark Throne or Isengard were ever generic about anything. Fenriz is a mastermind composer and whether on his own or not or even playing his ambient Neptune Towers keyboards project for awhile; they just don’t make ’em any more special. Like Lemmy of Motorhead, Ozzy, Ace Frehley, U.D.O., Tom Angelripper, Tom Warrior… Fenriz is simply an icon. I did *not* say that he is a “character”, though. Not as celebrity-moulded and high-profile as the afore-mentioned, but that is the allure of Darkthrone/Isengard/Gifts of Gods (2013 Nocturno Culto album)/Satyricon/Storm/Zephyrous (Dark throne alumni). Fenriz doesn’t care to make an album and then tour all over with the band. He is a consummate creator.

Now it would take time, with the famous run of Dark Throne’s first stretch of albums to blaze across the 1990’s decade — peak and then take a break before resuming with more power and fury and inspiration in 1999 to restart the Darkthrone machine, before any Isengard music would surface on 2 albums and the amazing “Crusade From The North” compilation disc would impress the masses who dared incline their ear as the last millenium closed. Most of us realized that Fenriz was and still is a genius. He is dedicated to what he does. The most recent spate of Darkthrone albums with a seperate disc in each solely for commentary has raised the profile of Fenriz to the point where it is just very recently that Darkthrone and Isengard are receiving their due. En masse.

Immortal, Mayhem, Gorgoroth, Tsjuder — all of whom are Norwegian — all play in the vein of the Black Metal style that Dark Throne was tossing shapes, darkened ones, starting at least 25 years ago. And all these groups are legitimate leaders and touchstones of ever-lasting greatness. Yet Darkthrone have embraced many other Metal and Extreme Metal and Grind and Crust and Hardcore/Punk sub-genres along the darkened path of the years of their history. In their hands everything becomes characteristically great and their own. Yes, it is this writer’s opinion; so what?

Isengard debuted with a debut album on the world stage after the Darkthrone rampage of the LPs — “Soulside Journey” (Death Metal), “A Blaze In The Northern Sky” (Untouchable Majestic Blackened Death), “Under A Funeral Moon” (Un-fune-real), “Transylvanian Hunger” (Vampyric Majesty), “Panzerfaust” (Woodland-friendly and icy cool), “Total Death” (Heavy as a Heavy Extreme record), “Goatlord” (A wicked battering) trampled their unseemly path across the shadowy depths of the Underground Metal scene in the 1990s.

Isengard raised it’s vampyric wings beset by darkness with “Vinterskugge”. The album combined the 3 demos that Isengard had made in the shadow of the horns (sic) of Dark Throne. Raw and bestial, unrefined and chest-beatingly brutal Metallic Norge sagas filled the debut Isengard disc. All that happened upon it were not quite sure what they were hearing. Isengard, vocal-wise, could not be categorized. Those who enjoy or idolize, like I do, epic Bathory know the thrill.

Then as the decade would come to a close, Fenriz would unleash “Hostmorke”. A wunderkind of dazzling musical compositions beset with imagery straight out of the best cinematic thrillers.

The world needs to rediscover Fenriz. I would get Nocturno Culto’s “Gift Of Gods” record from 2013 and play ’em back-to-back. Before, that is, resuming with completing your whole collection of Dark Throne’s discography.

And make darn sure that you get a hold of Fenriz’s commentary on disc. There is a novel approach used. It brings it all into a sharp summarizing focus and squarely puts the onus on this second decade of the millenium as the recollections come forward as the songs play in the background.  Isengard and Darkthrone are sorely underrated and under-appreciated. And both have gotten this treatment for their albums!

R.C. on his quest for the true successor of the long-vacated immortal Q-throne. There might be some underground resistance, er, but I think I found him…