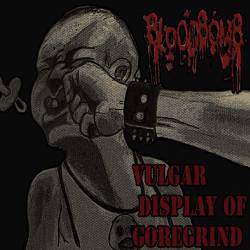 This is nasty, sexist, racist, try-hard-to-offend-in-a-modern-world-that’s-heard-it-all via samples and Grindcore tug-a-long songs. I kinda like the band name for some stupid, unknown reason my brain won’t tell me now. The band is officially known to play Australian Brutal Death Metal/Goregrind. Neither SINISTER nor CANNIBALISTIC INFANCY is BloodBomb in any way resembling. There is no attempt at being serious and the sound-picture is too lo-fi to inflict the comment that this Gold Coast of Queensland duet is truly brutal. Having formed 8 years ago, there are two members running the show: Sabz, on Vocals and Rob seizing the Programming and Guitar and Bass.

Actually, one must hear “Praise The Load” from the February 21st, 2014-released opening track and after 2 minutes you will either be convinced that the members of this band are prematurely insane or that you are one sick puppy if you are diggin’ this perverted slop. With not much to do, additionally, with your lonely life.

Curiously, you will have noticed that both of these releases bare the year of 2014. The programmed drums resemble a Sherman tank with huge wooden wheels stampeding with the heft of a thousand toothpicks across a cheap video game landscape. The vocals are actually quite competent and good at the piggy squeals as wells as the Deathgrunts and are being wasted here. (I sure do hope that these “musicians” aren’t investing all of the dough from their piggy banks on the production and promotion of these self-released full-length embarrassments. You know what? They are wasting my time. So what do I care if they waste anything of theirs, y’know? … Whatever)

The idea of the tons of intrusive samples is so you keep listening; and it works.

“Rape Rock’n Roll” and “Meat Flap Maggot” gives the impression that the duo making “…Gently” listened to the infamous SATAN’S MASSACRE (The worst Death Metal demo ever, possibly) to get a feel for what they needed to make an inspired record.

Curiously, and this may be a first — of sorts — both of these disharmonic albums have been self-released on the same day. Yep. So what? Sew buttons, as my forebears would say. Definitely, I can’t see Nuclear Blast or the super-extreme Sevared records signing up these characters.

I would waste my time in a more constructive way. May I suggest UFO conspiracy or String Theory documentaries? Even 10 hours on YouTube of rain falling on a hot tin roof would be time better spent. Seriously? Try to find BLOODSTAR. They were a very original act who had a unique Death Metal style.

Or for a band that grinds and rocks you, try OFFAL’s LP “Macabre Rampages And Splatter Savages”. (I figured that you might take something worthwhile away from reading about this massive brainfart of an album).

A.C. (You all know who I am talking about ) and AGATHOCLES seem like musical geniuses in comparison to the heaping turd that is BloodBomb.

Maybe I don’t like the name BloodBomb so much. BLOOD are a great band for solid DM. And BloodBomb sounds generic. I do apologize but all that these albums did for me was put me in a bad mood.

HOBBS’ ANGEL OF DEATH from Australia may have come out long, long ago but it is better than this Kerrap by a long country mile.

Being crude and lewd for the heck of it, with no substance is tepid and boooring!

A complete bomb. Two, in fact (for each “album”)