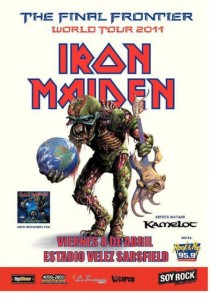 British heavy metal legends IRON MAIDEN have landed at position No. 2 on this week’s Billboard.com “Hot Tours” rankings with more than $10.5 million in box office grosses reported from tour legs in both South America and Europe. The band played two concerts in Brazil (April 3 in Recife and April 5 in Curitiba) and a stadium event in Argentina on April 8 at Estadio Vélez Sársfield in Buenos Aires. The concert with the best attendance was in Chile at the 47,000-seat Estadio Nacional in Santiago, the largest stadium in the country. With 43,780 fans in attendance, the performance on April 10 grossed 1.2 billion pesos ($2.6 million US$). At a concert on June 3, Berlin’s 17,000-seat arena, O2 World, drew a crowd of 12,817, the top attendance reported from the six German arenas in this week’s tally. 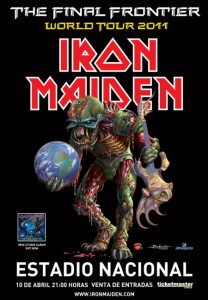 IRON MAIDEN was honored with a Grammy in the “Best Metal Performance” category in the pre-telecast ceremony at the 53rd annual Grammy Awards, which was held on February 13 at the Staples Center in Los Angeles. IRON MAIDEN was nominated for the track “El Dorado”, from the band’s 2010 album “The Final Frontier”.

“The Final Frontier” sold 63,000 copies in the United States in its first week of release to enter The Billboard 200 chart at position No. 4.