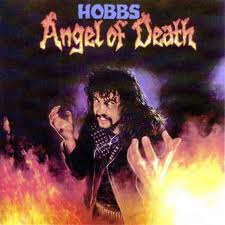 The great Metal Forces magazine compilation “Scream Your Brains Out” introduced many to Hobbs’ Angel Of Death.

Peter Hobbs was very active in the tape trading scene that was the way bands/mags/fans/& ‘zines went about getting exposure. The internet hadn’t been invented yet and computers weren’t being used publicly yet.

Among underdog bands like Carnivore and country-mates Mortal Sin that certainly thrashed like hell and created a lot of fun music but just didn’t get to the top of the heap; bands that made albums to headbang along to with an instant appeal; Hobbs’ music is tops.

“Marie Antoinette” is one of the thrash metal genre’s catchiest, best numbers. “Satan’s Crusade” and “Cold Steel” are a cross between Sacrifice and Slaughter’s (strangely enough bands at the other end of the globe in Canada) style mixed with Venom’s epic early 1980’s tune- “At War With Satan”.

“Bubonic Plague”- more precision thrashing. Just like Quorthon Bathory of Bathory it seems that Mr. Peter Hobbs wants to play underground music that he likes and if anybody else likes it, well, that’s good too.

“Brotherhood”- Double-bass drum pummeling pushes this classic thrash track along. What a great guitar sound. The drums get faster and faster at the end as you can tell that the band is having a gas.

Hobbs’ Angel Of Death is Thrash Metal that puts a smile on your face.

“Crucifixion”- towering riffing with that ‘stack-of-Marshall-amplifiers’ sound. What a monstrously simple guitar part. Easily the best track on this self-titled debut LP.

A must for fans of Black Metal Bathory stuff.

« Benedictum – Dominion Cross – Metal From Above »