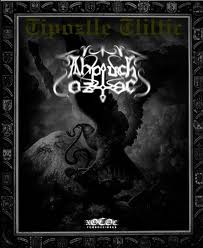 Not original in that they go out of their way to use some Industrial or Grind bent to make their music special ala the newly restored  Morbid Angel or Arkhon Infaustus.

Embrace Of Thorns, Tsjuder, Gorgoroth,  Bestial Mockery, Samael. Gorgoroth, Blaspherian, Burzum are all names that can be associated with this act.

Original in that they plow ahead, with heads-down conviction to make their music happen.

Examples of just a few other bands I can name with iron-gripped forcefulness, in a dead serious, straight-out undiffused manner are Acheron, War Hammer-UK, Abigor, Sabbat from Japan, etc.

I am actually talking about a band that believes in their music so strongly that the bucks have been spent to assure a more than decent recording. These dudes are from Mexico and had their Black Metal debut Mini LP come out during the early ’90s when Immortal and Marduk, among others, released their spotty debut LPs I would have proclaimed these guys as kings of Hell and Extreme Music.

Yet, nowadays, it may simply mean that these guys will be a special cult act.
As heavy as the Hellhammer-alike Warhammer but without the Frost/Death Doom trappings.

‘Nemiliztli In Coatl‘ lyrically concerns itself with a Mexican Nationalist agenda.

Please pay attention to what I am going to write here:

I don’t listen to and enjoy music to take right-wing stands or prop up any agenda. So if
you’ve got a problem with how together and excellent that I think this band’s music is I will have you know something: I don’t care diddley squat about anything but the music.

Abigail, from Japan, annoys me with their screaming.

Tsatthoggua made me almost cry out loud with boredom.

The classic line-up of Morbid Angel has resulted in a new, 2011 album that is no longer Death Metal but some kind of Gothic Grunge Metal thing.

I love music and I like the bands that do it well.

‘Himno Nacional Mexicano‘ is the last song and the only one that I can fathom a cause from, outright.

Here’s the spiel about Ahpuch Oztoc: The band is affiliated with the Zapatista Army of Liberation, a group that wishes to gain control over indigenous resources, particularly the land they live on, promote economic independence and the right to govern themselves according to ancient Mexican customs. The band are located in Culiacan, Sinaloa- Mexico.
Ahpuch Oztoc write about Mesoamerican Pagainism and staunch hatred.

Like a horde of swarming bumblebees Apuch Oztoc weave their sinewy Black Metal in a proud early-90’s way. They sound like early Satyricon on ‘1810‘. There isn’t catchiness as the militant strains of these Mexicans are designed to display buzzsaw and blaring, mid range guitars.

The band keeps their faces hidden in photos of the band.

I find it fascinating to listen about a band that doesn’t want anything in the music that you can smile about.

That is a challenge and sometimes I like to be challenged, at least musically.

Don’t get me wrong as the recording is ace, albeit being a Grieghallen Studios, circa 1993-1994 kind of production.

‘Nichoca Xokok’ starts out as a laidback, pensive anthem. I would say that this one has me thinking  that I am hearing the perfect marriage of Burzum and Bathory.

Ahpuch Oztoc like the latest Bastard Priest and Blaspherian are ushering in a new, cool age for Black Metal.

It would sure be nice to have a follow-up to this album as this album came out five years ago.

The Mayan civilaziton is a fascinating topic. I bring this up as I see a black and white photo that shows a monument of the kind you see in history books..

I guess all this doesn’t matter anyway, as the world according to the Mayan calendar ends during the year 2012. 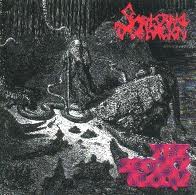 An intense forerunner to the Death/Doom sub-genre of Heavy Metal
that is played by denizens of bands nowadays.

The band is from Holland and Sempiternal Deathreign did a spectacular cover of Messiah’s ‘Space Invaders’.

Messiah are a band that made two thrashing, Deathly Doom classic LPs, ‘Hymn To Abramelin‘ and ‘Extreme Cold Weather‘ in the mid to late 1980s; thus way ahead of their time.

Sempiternal Deathreign could remind one of commandos the way the band took their place on the stage and delivered tight sets of their  songs.

Before you check out any more third/fourth/fifth generation Extreme Metal acts, do yourself a favor and pick up Sempiternal Deathreign as it is, what I’d say is certainly, one of the top 100 cult Heavy Metal albums of all time.