HATESPHERE To Once Again Work With Producer TUE MADSEN 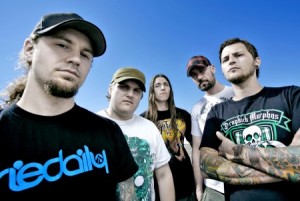 Danish thrashers HATESPHERE will enter Antfarm Studio in Aarhus, Denmark in June with producer Tue Madsen to begin recording their new album for a September release.

“We have been working with Tue on four of our albums, and he knows what we want, so the choice has been easy,” the band said.

A YouTube clip featuring a snippet of a pre-production version of one of the new HATESPHERE songs is available below.

Vocalist Esben “Esse” Hansen joined HATESPHERE as the band’s new singer in June 2010. In addition, the group parted ways with bassist Mixen Lindberg and temporarily replaced him with returning HATESPHERE member Mikael Ehlert (who remained with the group until the end of 2010).

HATESPHERE’s latest CD, “To The Nines” entered the official chart in Denmark at position No. 36. The CD was recorded over a nine-day period at Antfarm Studio in Aarhus, Denmark with producer Tue Madsen (THE HAUNTED, MOONSPELL, DARK TRANQUILLITY, GOREFEST).