Hate Eternal – Phoenix Amongst The Ashes 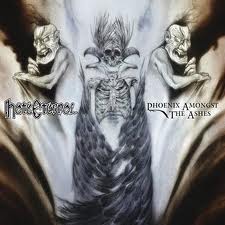 Hatred leads to vengeful acts. Hatred is part and parcel to jealousy, rage, and passionate hate. Hatred hardens one’s heart and inevitablty, if not right away, hatred will turn doubly back on the one hating.

Hatred leads to disease and a pessimistic view of one’s day to day life where thoughts of suicide and idleness constantly seep to the fore of one’s mind. Loneliness and an uncaring attitude for one’s self and others pervade each conscious moment.

Loneliness and cold negativity by those hating are felt to the nth degree when observing people laughing or behaving in a sensitive manner.

Hatred is a negative emotion. Hatred is the opposite of the state of loving. It is written that Love is not God; Rather that God is Love. So hatred certainly is not God either.

Hatred leads to beguiling acts of stupidity, spitefulness and gross insensitivity. Sometimes hatred can make one commit an unwarranted and unrestrained act of violence.

Hatred makes one forget that innocent children, animal pets, and the elderly are to be cherished and not preyed upon. Hatred makes one feel good when doing evil. Evil is hating love. And it is human nature that when one commits an act of hate that the perpetrator of the deed gets punished either to the fullest extent of the law or as the recipient of a flesh-piercing bullet.

The hating one if he continues to act on his hatred and commits heinous crimes will have time where all he does is gnash his teeth and curse the day he was born as he rots away alone or imprisoned.

Hatred blots out hope. Hatred resists faith and charity. Hatred holds onto what is bad till it decays, rots, and smells very bad. Hatred will not let go even when the cause is lost. Hatred will not turn away until it has killed what it feels is challenging it. Hatred is the product of fear amidst a sea of eternal confusion. Hatred seeks to loose one from all the good things that this life can offer as an ultimate method of self-punishment.

Hate Eternal has made it’s choice in one’s life when they think that all they can possibly do is hopelessly doomed to failure.

Hate Eternal are one of the most enduring brutal Death Metal bands from the United States.

Hate Eternal have turned the negative connotations of their band name into something powerful, fierce, worthwhile and deadly:

According to the Internet’s Yahoo Answers, Hate Eternal‘s ‘King of All Kings‘ is ‘the heaviest Metal song in the world’. Do I agree? Yes, kind of.

Even just considering Hate Eternal to be a candidate, Yahoo being one of the top three search engines on the Internet along with Google and Bing, it is still quite an achievement for this brutal, hyperspeed Death Metal band called Hate Eternal.

Do check out a video of Hate Eternal playing ‘King of All Kings‘ and you will see a band flailing about on their instruments, playactingly very angry that they have to play quite complicated stuff at very fast varying speeds.

Monstrosity, Origin, Vital Remains, Lamb Of God, Hellwitch, Immolation, Abysmal Dawn, and Broken Hope are good references to key you in on what you can expect from ‘Phoenix Amongst The Ashes‘- the latest Hate Eternal record.

Hate Eternal are from the third wave of Death Metal bands.

Gojira would be a fourth wave band, to give you some idea of what has been going on in the Death Metal genre with each subsequent wave trying to out-heavy the one before it.

Other dimensions of heaviness in the Death Metal genre are accomplished by adding in other current heavy musical styles and sounds of the day.

Alternative, Industrial, Power Violence, Dark Prog and most importantly Hardcore Punk and Thrash, and Nu-wave Metal stuff like Avenged Sevenfold have revolutionized the Death Metal world to make it go ’round these days.

Then there are bands like War Hammer or Suicide Silence who like to personify the best retro aspects of the Death Metal genre’s past and give it a refreshing, return-to-the-old-days feel.

2011 is a tough place and Hate Eternal have gotten progressively tighter. And meaner. They haven’t changed all that much in their 12 years, to date, that they’ve been recording albums. Rather Hate Eternal have been consistently, from album to album, refining their already fantastic over-the-top style.

‘Phoenix Amongst The Ashes‘ has some cracking songs. And these songs are the business. Great musicianship abounds from the eternally hating trio that is Hate Eternal. A.k.a- H.E.

The stupendous truth about it all is that in-concert H.E. do some of the latest tracks that appear on this album ten times better than the excellency of the studio cuts. So it would be wise to check these guys out when they come to your town, touring.

To give you an example of how Hate Eternal comes alive on stage: On April 30th, 2011, Hate Eternal played in The Netherlands with other heavyweights at what was billed as the Neurotic Deathfest 2011 and the everblack hit ‘King Of All Kings‘ proved H.E. to be unbeatably tight.

‘Behold Judas‘ and ‘Powers That Be‘ both from the newest Hate Eternal LP being reviewed here-in, also exploded onto the ‘live’ set in jawdroppingly tight fashion. The accent is on flawlessly reproducing their studio work, with each of the three instruments- guitar, bass, and drums being equalized almost perfectly.

Do not doubt me for a second. Trust me, Hate Eternal are the business on the concert stage.

‘Haunting Abound‘ is also a cut from the new album and it is included in the hate circus that is Hate Eternal‘s stageshow. The trio doesn’t need any props however as the lightrig does the job for them.

The lights move cheetah-like just as the band’s upper appendages do.

‘Haunting Abound‘ stands out due to it’s heads down main parts and seriously hard and frequent, smashing cymbals. H.E. push the envelope on aggressivity. And lo and behold it works.

Having done five full-length albums so far, the best being 2002’s ‘King Of All Kings‘ sophomore H.E. effort; followed by ‘I, Monarch‘- the 3rd H.E. LP from 2005; ‘Fury And Flames‘, the 4th LP from 2008 comes it at third best as it suffers most notably from a lack of guitar soloing.

There can be no excuse made for this because Eric Rutan of Hate Eternal is a former guitarist of the mighty Morbid Angel, that features fretmaster Trey Azagthoth.

Furthermore, in 2001 the gifted Eric Rutan released an album under the banner of Alas.

It was Progressive Heavy Metal of landmark proportions.

Going back ten years from the Alas project, H.E. mainman guitarist and lead vocalist Eric Rutan led his band Ripping Corpse and made a Death Metal landmark LP entitled ‘Dreaming With The Dead‘, in 1991.

This 2011 5th LP from Hate Eternal – ‘Phoenix Amongst The Ashes‘ actually takes up the mantle of ‘Conquering The Throne‘ which is the debut LP by H.E. from 1999, in overall feel and execution. This can be seen as a good thing, at least for myself, as I adore the first H.E. album.

‘Bringer Of Storms‘ is a good example of a track from ‘Phoenix Amongst The Ashes‘ where the vocals are infernally deep, hateful and staccato. The vocal delivery of Mr. Rutan brings to fruition the Black Metal feel that I have felt has been missing on every album inbetwixt the debut LP and this smokin’ new one.

‘Lake Ablaze‘ is a good example of what is on the new Hate Eternal LP that could’ve just as well have been on the ‘Conquering The Throne‘ debut LP. ‘Lake Ablaze‘ pounds away mercilessly at the listener. This no frills approach works best for Hate Eternal. They are not a band that can afford to or need to get fancy.

Hate Eternal are a well-oiled death machine after a good many years slugging it out in the extreme Heavy Metal underground.

What is nice about Hate Eternal is how decidedly Metal the band is.

As an aside: Guitar solos, when crust punk influenced Grindcore came around sometime in the 1990s, used to be considered wimpy. What a joke, right?

The reason that ‘Lake Ablaze‘ is so memorable is that the lead guitar break is brilliantly executed, setting Hate Eternal apart from any pretenders to the Death Metal throne that these Floridian Metal meisters inhabit along with a choice few other bands.

A brief look at some of the other choice album cuts on ‘Phoenix Amongst The Ashes‘:
‘Rebirth‘, the opening cut on this new H.E. album is a scorcher.

‘The Eternal Ruler‘ continues Hate Eternal‘s obsession with rulers, kings, and monarchs. ‘Thorns of Acacia‘ is a menacing, brooding number that fits in the running order of this long-player seamlessly with ease. ‘The Art Of Redemption‘ is a treatise on how to survive. ‘Deathveil‘ is the simplest yet easily 4th most effective tune on the album.
‘The Fire of Resurrection‘ is a perfect reflective closer that espouses on the power of fire, itself.

Hate Eternal manage somehow to be heavier than Florida’s heaviest, by the sheer weight of talent and songwriting alone without having to scrounge influences from Nu-Metal, Industrial, or Hardcore Punk.

As it is the world stage for Death Metal tends to be an increasingly more brutal place every day.

Hate Eternal with ‘Phoenix Amongst The Ashes’ have rose to the challenge of an increasingly dense Death Metal scene to deliver a stupendously satisfying listen.