GIRLSCHOOL Pulls Out Of North American Tour With DIAMOND HEAD 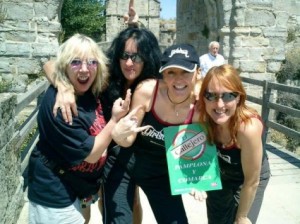 Commented GIRLSCHOOL’s management: “The main reason for [GIRLSCHOOL pulling out of the tour] is the fact that the main sponsor wanted to wait for the [group’s new] album to be released in the U.S. before the band went over to tour. This was for the company extremely important and also for us the only possible way to bring the band to the U.S. and join DIAMOND HEAD on their tour. For that reason, the financial situation has become absolutely impossible to work with, forcing us to cancel the entire tour. As soon as we have a definite release date for ‘Hit And Run Revisited’ in the U.S., we will be back!”

GIRLSCHOOL last year spent time in the studio re-recording its classic 1981 album “Hit And Run”. The new version of the LP will be released in late 2011 to celebrate the album’s 30th anniversary.

“Hit And Run” was originally made available in March 1981, followed a short time later by a single featuring the title track. Both releases were very successful in the U.K., with the album reaching position No. 5 and the single No. 32 on their respective charts. The LP also charted in New Zealand and in Canada, where it went gold.

The U.S. version of “Hit And Run”, which came out in 1982, featured a different track listing, including songs from GIRLSCHOOL’s first album, “Demolition”.

GIRLSCHOOL supported MOTÖRHEAD on a U.K. tour in November 2009.

GIRLSCHOOL’s original guitarist, Kelly Johnson, passed away on July 15, 2007 after a six-year battle with cancer of the spine. Along with Johnson, the classic lineup of GIRLSCHOOL included Kim McAuliffe (guitar), Enid Williams (bass) and Denise Dufort (drums). The band was an integral and major force in the New Wave of British Heavy Metal (NWOBHM) movement, beginning with the release of its debut album, “Demolition” (1980), and continuing with the follow-up efforts, “Hit ‘n’ Run” (1981) and “Screaming Blue Murder” (1982).