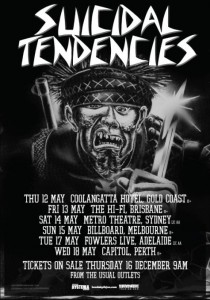 A female fan of the long-running Venice Beach, California thrash/punk band SUICIDAL TENDENCIES jumped on the back of the group’s lead singer, Mike Muir, and pulled the bandana off his head during SUICIDAL’s headlining performance on May 14, 2011 at Metro Theatre in Sydney, Australia. Video footage of the incident, as well as Muir’s subsequent onstage rant in which he can be heard saying, “I’m not ready for a fucking fat bitch to jump on my back when I ain’t fucking lookin’,” can be seen below.

In a recent interview with KillYourStereo.com, Mike Muir stated about the status of SUICIDAL TENDENCIES’ long-awaited new studio album, “One of the things we’ve realized is when you’re young and put out your first record and start playing it to people, you are never thinking about thirty years down the track. I mean that’s twice as old as you are at the time. What we’ve learned is that when we do a new record, we know what we’re doing, we know it will be a great record and we’re not going to worry about what people are listening to at any given time. We just have to make sure we like it and we’re not trying to be some kind of a tribute to something else. An album has to be a statement of what we believe in. Consequently, I think our music has obviously held up against the test of time. The new record will be the same; we’re not going to try and fit in with what other people are doing. It’s something that we are going to think very strongly of and that 10, 20 years later it will still sound good to someone who is hearing it for the first time. I think that’s the most important thing.”

When asked how long the band has been writing new material for, Muir said, “Well, we have our own studio back home in the States and being our own label and with the way music is now, we don’t have to worry about putting something out by a certain time. Right now we have so much music, and we’ll play stuff and people will be like, “Fuck, what’s that?” and one of us will be like, “I don’t know, man, just some stuff I’ve been working on” and then (they would ask) “When’s it coming out?” and we’d be like, “I don’t know, man. I don’t even know if it will!” We’re not really worried about “the game” as much as we are about the music. I think that will probably come across when the next record comes out. Probably early next year, I would imagine. I think in October I’ll be doing a CYCO MIKO record which will have a taste of new SUICIDAL, old unreleased SUICIDAL, new INFECTIOUS GROOVES, old INFECTIOUS GROOVES and a bunch of other stuff as well. I think that will give people a taste of what’s to come and also surprise a few people with some of the stuff that we never put out.