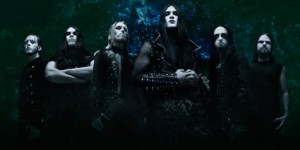 According to TMZ.com, Weston “Arcane” Coppola Cage, the 20-year-old frontman of the California-based black metal band EYES OF NOCTUM and son of actor Nicolas Cage, was taken to the hospital by ambulance for a mental evaluation and possible 5150 hold.

(A 5150 hold allows a qualified officer or clinician to involuntarily confine a person deemed to have a mental disorder that makes them a danger to himself/herself and/or others and/or gravely disabled.)

Sources tell TMZ.com, “Weston was at the Farmer’s Kitchen in Hollywood at around 4:00 today when his trainer told him he couldn’t eat something on the menu. For some reason, Weston went off and started pushing the trainer in a violent way, at one point trying to roundhouse the trainer,” reads the report on the site. “The trainer took Weston down, and someone else tried calming Nic’s son down, to no avail. Weston got up and continued freaking out. Cops showed up and told Weston if he didn’t get on the ground they would tase him. Weston then complied. Cops put Weston in handcuffs but they were so worried he was unstable they strapped him to a gurney.”

Nicolas Cage, who was arrested in April for domestic abuse, public drunkenness and disturbing the peace stemming from a loud altercation with his wife, Alice Kim, sported a black and white tux as he exited the French Quarter while on the way to the wedding.

Check out photos at DailyMail.co.uk.

EYES OF NOCTUM last year entered Entourage studios to begin recording its second album, “Narcoma”, for a 2011 release through Morbid Rose Records. A single, “Inside The Minds Of Unrest”, is expected to precede the full-length CD.